​Crystal Palace have enjoyed a strong start to the season and find themselves sitting comfortably in ninth in the Premier League at the turn of the year.

However, with a lack of goals already an issue at Selhurst Park, Wilfried Zaha being heavily linked with a move away and a host of injury woes, business in the transfer window will be key if Palace are to maintain their impressive Premier League form.

Roy Hodgson has allegedly ​appealed to the Palace owners for funds in the new year, suggesting the Palace boss has a selection of players in mind to strengthen his squad.

While bringing in all five would be near impossible, here are a number of players Palace should be targeting if they dip into the transfer market in January. Martin Kelly has been deputising at right back in recent weeks in the absence of Joel Ward, and signing a right-sided full back should be a priority of Palace's after failing to replace Aaron Wan-Bissaka, who left for Manchester United in a £50m deal in the summer.

Jayden Bogle would be the ideal signing. The 19-year-old has been strongly linked with a move to a Premier League club, with Palace one of the sides with their eye on the Derby right back. Frank Lampard unearthed Bogle last season, handing him his Championship debut, and he went on to make an impressive 43 appearances.

The youngster has three assists in 17 Championship outings this campaign and is held in high regard at Pride Park. However, with Derby themselves looking to free up funds to enable them to strengthen their squad in the window, it is believed they will be willing to sell Bogle for £7m. This would be an excellent deal for ​Palace to secure a young, promising defender.

Injuries to Jeffrey Schlupp and Patrick van Aanholt have left Palace short of options at left back.

Joe Byran has been a key cog in Fulham's promotion push this season, chipping in with a goal and three assists from left back.

Fulham paid Bristol City £6m for Byran's services on deadline day of the 2018 summer transfer window, so it is likely Palace would have to fork out at least £10m if they are to prize the left back away from Fulham. Palace are not crying out for another central midfielder, but ​over the Christmas period Hodgson has been restricted with his squad rotation. James McArthur and 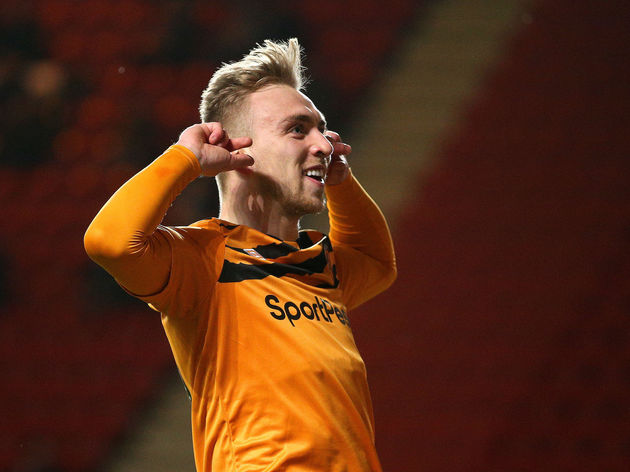 Palace are already struggling for goals this season, and with Zaha strongly linked with a move to Arsenal or Chelsea, and Andros Townsend picking up an injury, Palace are in desperate need of some creativity.

A winger with an eye for the net, Hull City's Jarrod Bowen is just the kind of player Palace need to be targeting. The 21-year-old hit 22 goals in the Championship last year, and already has 15 goals and five assists to his name this season. Tricky, exciting, direct, and a terrific finisher, Bowen would be the perfect fit for Palace.

However, a number of Premier League clubs are rumoured to be keeping tabs on the highly rated youngster, with Arsenal, Tottenham, Newcastle and Aston Villa all linked. Palace have just three strikers in their squad: Connor Wickham, Christian Benteke and Jordan Ayew. Wickham has barely featured and Benteke hasn't scored, therefore bringing in a striker is crucial for Palace.

Gayle spent three years with the Eagles, and has a decent scoring record in the Premier League for the club, topping their scoring charts each season. Slight and nippy, the 29-year-old would offer something different to the strength of Benteke and Wickham up front.

After being restricted to just seven Premier League appearances this season, Newcastle are believed to be willing to listen to offers for Gayle. However, the Magpies have reportedly slapped a ​£15m asking price onto the striker, and a number of Championship sides are rumoured to be interested in signing him.