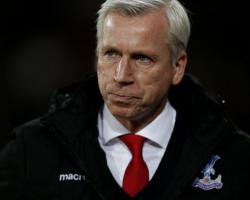 Liverpool this week reversed plans to raise prices from next season after protests from their fans, but Palace are among those who have significantly increased a minority of their admission fees and others could yet follow.

There is a wider belief that the atmosphere at many top-flight clubs has declined in recent terms as a consequence of the traditional supporter struggling to afford the prices asked and missing out to corporate seating or tourists.

And, given Selhurst Park is one of the few stadiums to retain the type of atmosphere that appeals, Pardew has spoken of the importance of those fans.

"Because if they think it's just the product on the pitch that makes the Premier League what is it, it isn't

"You won't have those dramatic finishes, those edgy games, those really conflictual games that we have without them, so if they are (priced out), and they are the main ones driving (the atmosphere)..

"You don't see too many lawyers or doctors in the corporate areas moaning too much, and they get the best service in the world, trust me

I go around the world, so our corporate fan has nothing to worry about in my opinion, but I do think that the core fan, when he's making this kind of message, we need to listen."

Palace host Watford in the Premier League on Saturday, knowing victory would lift them above Quique Sanchez Flores' 10th-placed team

Pardew expects to again have Dwight Gayle available for selection after a hamstring injury, and Connor Wickham after suspension, but he does not expect Yannick Bolasie or Bakary Sako to return until next week at Tottenham, and Wickham is unlikely to replace Emmanuel Adebayor.

"I'm a fan of the manager (Sanchez Flores) because I think he's a gentleman," Pardew said

"He's gone around his business in a very professional manner

"He has a great CV, he was a great signing by Watford and the players follow great managers so the players are lucky in my opinion to have him and he's also lucky to have a good set of players there, good leadership

"(There's) a lot of foreign personnel there and to keep that spirit Watford have come up with is not easy and they've done that very well."