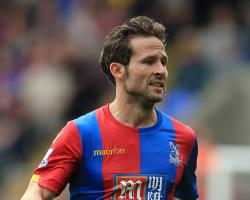 The Eagles manager selected a weakened XI for Sunday's 4-1 Barclays Premier League defeat at Southampton, choosing to rest Wilfried Zaha, Wayne Hennessey and Scott Dann, and to not risk Yohan Cabaye, Yannick Bolasie and Connor Wickham, effectively the core of his team.

Joe Ledley will definitely miss out because of a fractured fibula that could yet end his hopes of appearing for Wales at Euro 2016 but, beyond him, the potential absences of Wickham and Cabaye have left Pardew concerned.

"We had so many missing and we rested Scotty Dann, but Connor was missing for a knock, we're a little bit worried about him, Cabaye had a knock and we were worried about him," said Pardew, who added he would change Palace's build-up to the clash at Wembley having learnt from his experience in 2006 while manager of West Ham.

"Zaha looks okay but we couldn't risk him

We had a few problems going into this game, I'm hoping they'll all clear themselves up

They usually do, cup final week, I find

Hopefully that'll be the case.

"We can look forward to the preparation, and the attention, that's going to come to this fixture, and then we've got to win it, and that's what we'll try and do.

"(Emmanuel Adebayor's) been great for us, so we'll wait and see if he's going to start; Connor's injury, who knows, he may start

We'll have to wait.

We're really going to focus on the job in hand, so I'll learn from that experience and hopefully take it into this game."

After yesterday's win secured a top-six Premier League finish for Ronald Koeman's team - Palace ended the season 15th - the Dutchman spoke of his plans to discuss his future with Southampton's board.

The manager has been linked with the vacancy at Everton, created by the sacking of Roberto Martinez, but said his desire is to remain at Southampton, even though he recognises their impressive performances could lead to a third consecutive summer of losing his finest players.

"Next season we need to be prepared that we lose some players, and it's all about what we need to sign to keep the strength in the team.

"We hope that we go straight to the group stage (of the Europa League), that would be perfect."