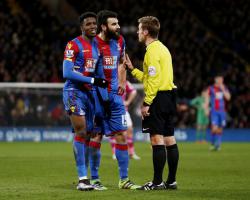 Bournemouth's Adam Smith made a routine professional foul on Jordon Mutch in a relatively unthreatening area in the 84th minute, when Palace were chasing an equalising goal after Marc Pugh and Benik Afobe had given the visitors the lead.

Jones punished Smith with what appeared the right call in a yellow card, but Pardew believes the referee could have been stronger and that Palace are frequently being undermined to the extent he has lodged a complaint.

"I spoke to (referees' chief) Mike Riley about (Mark) Clattenberg because the two incidents Saturday, the guy (Stoke's Stephen Ireland) should get sent off," said Pardew, whose team went ahead in the 27th minute through Scott Dann's close-range volley.

"No one gets sent off against us, no one

You've got to really commit murder to get sent off against Crystal Palace, no one gets sent off here.

"Again, we have a one-on-one (against Bournemouth), when Jordon Mutch goes through

For me, it's another tough decision.

"The one on Saturday was a definite sending off in my opinion, which Mike Riley agreed with me on, and at some point we will get a referee that acknowledges that, maybe."

Pardew's anger may have owed much to the fact his team underperformed in the absence of the injured Yohan Cabaye.

The talented midfielder suffered an ankle injury when being fouled by Ireland on Saturday in the incident Pardew said deserved a red card, and without him Palace's creativity was minimal.

"We lacked composure at times," added Pardew, who gave new signing Emmanuel Adebayor his debut from the bench.

"We certainly missed Yohan to just put his foot on it and slow the game down, it was a frantic game

Bournemouth really worked hard, put us under a lot of pressure.

"We're a bit unlucky to lose, we had some good chances

The two chances they had they go in: that's the run we're on at the moment.

"It is becoming a problem, our strikers not scoring, there's no doubt about that.

"We're going to have to really dig in at Swansea (on Saturday), to try and get something."

Victory took Bournemouth seven points clear of the Premier League's relegation zone and well on course for survival with 28 points from 24 games.

Almost as encouraging for Eddie Howe would have been the third goal in three games for club-record signing Afobe given the ÃÂ£10million recently spent on him represented a significant risk, and the manager said: "To come back from a goal down was the biggest highlight.

"You hope (Afobe will have the impact he has had), I don't know if you expect

He's got time on his side, he's a young player, he's still got a lot of improvement in him

"He's adapted to the level, the move, the hype

It's been really pleasing that he's had the confidence and temperament to take it in his stride and carry on doing what he was doing for Wolves.

"There's a long way to go (before survival is secured)

But it certainly helps to win away from home."