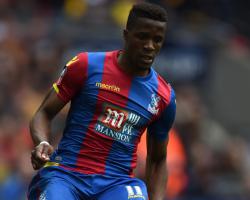 Boss Alan Pardew revealed Zaha is still battling a muscular strain "just above his hamstring" and remains a doubt for the FA Cup showpiece with Manchester United.

Palace can rubber-stamp their Premier League security with victory over Stoke at Selhurst Park on Saturday, with Pardew challenging his men to prioritise their top-flight safety and maintain focus.

Pardew also admitted Zaha could still be doubtful for the FA Cup final on May 21 even if he sits out the remaining league clashes against Stoke and Southampton.

"Wilf still has a problem that will still keep him out for this weekend," said Pardew

"Hopefully he'll be okay for the final

"He actually did the injury before the semi-final

"We can't take a risk with him, it really is about risk his injury

There's no way he can play this weekend, he could possibly play at Southampton

Yannick Bolasie could miss out against Stoke through illness while captain Mile Jedinak remains doubtful with a "knock".

Pardew also admitted the club will fine midfielder Lee Chung-yong for criticising the manager in a recent interview.

Lee hit out at Pardew for being "too hot tempered in matches", claiming the former Palace midfielder "forgets how many substitutes are left".

Pardew insisted Lee's assertions were factually incorrect but also claimed there is no rift with the 27-year-old from South Korea.

"I have dealt with it because he's incorrect on a couple of points there about team selection and stuff like that," said Pardew.

"He's made an error

He said it got lost in translation, that can happen and I've had it before.

"But some of it isn't lost in translation, though, and he'll get a fine for that.

One of the key points in there didn't occur.

"So that's an internal process the other players will have to learn from.

"Criticise the manager, other players or staff at this football club: do it in house, knock on the door, come and see me, we'll sort it out no problem.

"It was a mistake on his part and he'll be punished for that in terms of a fine."