Emmanuel Adebayor must wait for decision on Crystal Palace contract 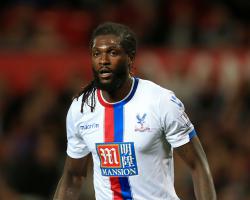 The striker joined Crystal Palace as a free agent during the January transfer window and has contributed only one goal towards them securing their Premier League status and reaching next week's FA Cup final against Manchester United.

He arrived on a short-term contract until the end of the season with the option of a further 12 months but though a high-profile player, he will not learn his fate until the season is over.

Pardew has already spoken of his plans to strengthen Palace's squad in the summer, and Marouane Chamakh is expected to leave when his contract expires, but regarding 32-year-old Adebayor the manager said: "He's been a good character around this place, he's won trophies.

"He hasn't had a lot of starts but we have still got two big, big games to go (against Southampton on Sunday and against United in the Cup).

I think he has still got a big part to play as he's a top player."

Victory at Southampton in the Premier League on Sunday could yet secure a 12th-placed finish for Palace, but Pardew will rest Wilfried Zaha and Wayne Hennessey in preparation for next week's final at Wembley.

He is also without Joe Ledley, who he rates as "50-50" to feature at Euro 2016 with Wales, because of a fractured fibula.

The 37-year-old Argentinian will go level with John Jackson on 388 appearances and Pardew said: "Speroni will play

I want to play him because he equals the record in this game.

"Although the sentimentality isn't really the top of my agenda as a manager, on this occasion it is.

"He trains brilliantly, he's been fantastic back-up to the other goalkeepers and they've learnt so much off him and the way he's conducted himself as a senior professional.

"He has to break the record next, so let's wait until he breaks it.

"He could play into his 40s, because his conditioning and professionalism is such

You wouldn't doubt that."