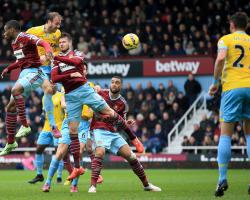 The 53-year-old spent three years as Hammers boss and, whilst he has been back on several occasions, this will be one of the most memorable as Jason Puncheon inspired the Eagles to a 3-1 win - although the victory was tainted as two-goal hero Glenn Murray was sent off in the second half.

Murray had threatened on no less than three occasions before he opened the scoring courtesy of a huge piece of luck as the unwitting Aaron Cresswell mis-kicked the striker's header straight past Adrian.

It was a goal befitting a scrappy first half of few chances and plenty of wasteful possession, with Mark Noble's free-kick hitting the woodwork the closest a lacklustre home side came to getting on the scoresheet.

But, whereas West Ham continued in a lethargic vein after the interval, Palace were buoyed by their goal and doubled their advantage through Scott Dann's header six minutes into the half.

Both goals had come from Puncheon corners and he set up the third as his free-kick was headed home by Murray with 25 minutes remaining, but the forward's afternoon was to end less auspiciously as he was sent off for two yellow card offences.

Allardyce saw his side grab a consolation through Enner Valencia but the 60-year-old will expect to come in for more criticism as the Hammers have now gone on a run of just one win in 10 Premier League games - with derbies against Chelsea and Arsenal to come.

Cresswell came close to opening the scoring in the early stages as Puncheon's sloppy pass found its way to the left-back, who almost caught out goalkeeper Julian Speroni with a miscued cross.

Moments later Puncheon was guilty of tripping Noble on the edge of the Palace penalty area, with the Hammers midfielder dusting himself off to strike a free-kick which hit the top of the crossbar.

Playing in a central midfield role, Puncheon was involved throughout the first half and produced a slide-rule pass to Murray, who beat the offside trap but could only hit the side-netting under strong pressure from Winston Reid.

The hosts were struggling to break down a sturdy Palace defence with Diafra Sakho restricted to a speculative effort after being played in by Noble.

Murray, who was cautioned for catching Cheikhou Kouyate, again brought another smart save out of Adrian after finding space in behind before the 31-year-old had a penalty shout turned down by referee Mike Dean as he tangled with Carl Jenkinson at the back post.

Palace were starting to enjoy a period of sustained pressure and Adrian was again forced to keep out a driven Murray effort but the deadlock was broken shortly before half-time as Murray attacked Puncheon's corner, seeing his header towards goal sliced into his own goal by Cresswell.

West Ham started the second half slowly and were made to pay for it as Dann got on the end of another Puncheon corner - with the defender's header too powerful for Adrian to keep out.

With an hour gone, Allardyce turned to latest signing Nene in the hope of the debutant inspiring a comeback, with the home side still struggling to make an impact.

But, before the former Paris St Germain forward had touched the ball, Palace were home and dry as Murray headed in Puncheon's free-kick.

Nene came close to bringing the game back towards West Ham but his curling effort clipped the outside of the post with Speroni beaten before Murray was dismissed for collecting a second booking for catching Reid as the defender tried to clear his lines.

Valencia reduced the arrears with a measured finish from outside the box and the hosts continued to push forward, with Sakho turning a Jenkinson cross over the bar.

The on-loan Arsenal defender then saw his own close-range shot well-saved before Stewart Downing crashed a shot into the side netting.