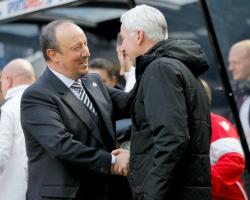 Their demotion was confirmed this week when rivals Sunderland defeated Everton 3-0 and comes just one full season after Pardew departed for Crystal Palace.

He has overseen their transfer policy and also - unlike at Newcastle - prioritised the FA Cup in which his team will contest next week's final.

It has strengthened his belief his former club's poor recruitment has done much to inspire their downfall, when despite spending ÃÂ£80million they are guaranteed to finish in the Barclays Premier League's bottom three.

But while there is hope Benitez may stay to lead them into next season, Pardew is convinced that whoever is in charge will need greater power.

"It's important, if it's Rafa Benitez or the new manager, (he) gets full control of transfers," said the 54-year-old

"I think that would be something the new manager would need.

"My reaction is one of sadness, for the players and the staff there and the fans, who have suffered.

they built some foundations and that's what they're going to need to do.

"I'm just sad, because I love that football club and I'll always love it.

"I'm very sad that it's gone down, and I really, really hope - passionately - that this brings some change for the better."

Pardew on Sunday takes Palace to Southampton, another of his former clubs, where victory could secure a 12th-placed finish just six days before the Wembley cup final against Manchester United.

By his own admission the final is his priority so he is to rest Wilfried Zaha and goalkeeper Wayne Hennessey - Julian Speroni is expected to deputise and equal the club's record appearances for a goalkeeper - but because of a fractured fibula Joe Ledley will miss out and is considered by his manager to have only a "50-50" chance of appearing for Wales at Euro 2016.

"We're all so desperate for Joe Ledley, he's obviously going to miss the game and the final, and he's got a battle to make the Euros, so that's been a blow," he said.

"Everybody else looks okay, there's still one or two we need to protect in this fixture, but we're hoping we get a good run to the cup final.

I'm sure (Wales manager) Chris (Coleman) will be desperate for him.

"We're trying everything we can, we've got oxygen chambers and all sorts to try and help the recovery.

"He was very disappointed when he heard the news but he's a strong character, and now he's just determined to make the Euros, so he's got a good mindset."