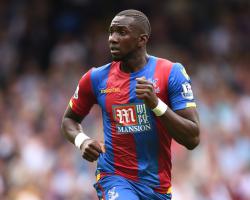 Bolasie missed last weekend's home victory against Aston Villa on compassionate grounds, travelling back to his home in DR Congo to be with his family.

The 26-year-old winger has returned to London and, according to Pardew, is in a "good frame of mind" and keen to play against Barclays Premier League champions Chelsea at Stamford Bridge on Saturday despite his difficult week.

"He has lost his father and of course that affects any human being and any family, and he's dealing with his family," Pardew said

Because his father went to every game

I think that's good for us, it'll be good for him and his family.

"The player's welfare is in good shape, he's in a good frame of mind

We're very pleased that he's dealing with it so well."

While Pardew welcomed Bolasie's return, the Palace boss revealed that Mile Jedinak will miss the final fixture before the two-week international break - and Australia's 2018 World Cup qualifying games with Bangladesh and Tajikistan.

The club captain, 31, limped out of the Capital One Cup win over Shrewsbury in midweek early in the second half because of a hamstring injury.

Palace are awaiting the results of a scan to determine the extent of the damage.

Pardew said: "Mile has a little hamstring problem and definitely won't be involved at Chelsea

"It looks like he will be out for two-to-three weeks, to me

And he will probably miss the international window, too."

However, goalkeeper Julian Speroni has returned to full fitness after a hand problem but it looks like Alex McCarthy will retain the gloves against Chelsea

And the group of three goalkeepers are competing and that's keeping Alex exactly where I want him," said Pardew

Real competition to get into the side and of course that bodes well for the team."