Adebayor is eager to prove himself 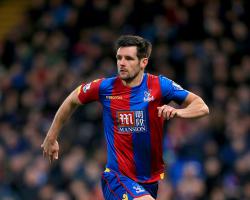 Adebayor made his first start as Crystal Palace stopped the rot of five consecutive Barclays Premier League defeats with a 1-1 draw at Swansea.

Eagles boss Alan Pardew had suggested before the game that the fitness levels of Adebayor, who only played a handful of games for previous club Tottenham in 2015, meant the 31-year-old could only make a cameo appearances at the Liberty Stadium.

But in the event Adebayor played 86 minutes and Dann feels the former Arsenal, Manchester City and Spurs striker has a huge role to play as Palace seek to get their season back on track.

"He has that natural fitness, he has worked hard with a personal trainer and that tells you what type of lad he is," Dann said about Adebayor.

"He is going to be a big player for us until the end of the season if we can use his qualities and get him into the game.

"At previous clubs he has proved he is a world-class striker and he has shown it over and over again.

"He has a point to prove and it has given us a lift to see someone like that come in with the run we were on.

"He has won things, he is a big player, and someone who the majority of defenders in this league will not want to play against when he's on top form.

"Hopefully we can get him there as soon as possible."

Central defender Dann underlined his threat from set-pieces by scoring for the second successive game and the fifth time this season.

"I work hard on the training pitch to try and get on the end of things," Dann said.

"We have not scored many goals and we need everyone to chip in.

"Hopefully I can get a few more before the end of the season but the most important thing was to come away from here without a loss.

"They have been on a good run recently and we needed to dig in after losing five on the bounce.

"We had to stand up and now we can look to move forward."

Swansea are unbeaten in three games under new head coach Francesco Guidolin with the Italian veteran overseeing one win and two draws.

But Swansea's league position - two places and four points above the relegation zone - would be a lot healthier but for their vulnerability at set-pieces.

"That's something we need to put right," midfielder Jack Cork said after Swansea had conceded from a corner for the third successive game.

"We've conceded sloppy goals against West Brom and Crystal Palace and it has cost us a few points.

"The good thing is we looked pretty solid at set-plays apart from the one they've scored from but it has ended up costing us the win.

"We've got to improve that next week and if we beat Southampton it's four points from six, and that's a profitable return from where we are.

"We are four points clear at the moment, but that's nothing if we don't keep picking up points."