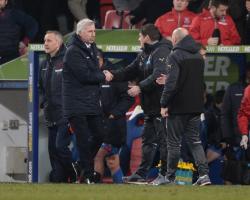 The Palace boss brought to an end an often-turbulent five-year spell at St James' Park to take over in south London at the turn of the year and their first meeting since then ended in stalemate.

Papiss Cisse opened the scoring for the visitors, whose fans berated Pardew on only a handful of occasions throughout the night, but that was to be Newcastle's only shot on target as the Eagles turned up the heat.

It was his substitutes that Pardew had to thank for preventing just a second defeat since his arrival at Selhurst Park as Bolasie, back from African Nations Cup duty, whipped in a superb cross which was converted by top scorer Fraizer Campbell with a little under 20 minutes remaining.

"I thought we really took the game to Newcastle," Pardew said.

Yannick's cross was of the highest order and he had no right to put in a ball of that quality from the room he had.

"It was a great goal for us and gave us time to get a winner - and I thought there would only be one winner at that point but we could not quite get a second goal.

"He is an exciting player - I have been an opposing manager to him - with great power and technique and it gives you an unpredictability in your team which I quite like."

Newcastle boss John Carver, who had worked as Pardew's assistant, echoed his former number one's sentiments about Bolasie's ability as his side remain with just a solitary win since Pardew's defection.

The travelling fans appeared unhappy at the decision to replace attack-minded Remy Cabella with defender Paul Dummett with the game level at 1-1, but Carver was quick to explain his reasoning.

"Let me tell you something about the substitutions

I brought Dummett on because I know all about Yannick Bolasie," he said.

He is a talented footballer and I worked with him ever single day at Plymouth and I know he has a bright future ahead of him and he is a talent.

"You saw from his first touch, he shifts the ball quickly and puts a quality ball in the box and they score from it.

"I was concerned that he would do that again and we would lose the game so I had to do something about it - sometimes you have to take off your flair players to get something out of the game."

Both managers, close friends away from the pitch, pointed out their only focus on the night was getting the best result for their respective teams.

"I just came here and tried to get three points," said Pardew.

"Knowing that Newcastle had some very good players

That was my only focus

It was nice to see both sets of players apply themselves in a good manner and the points were fair.

Carver added: "I would have take a point form the situation, there has been a lot of hype about Alan and myself - we are good friends and that is where it ended tonight.

"I was in charge of Newcastle and that is all I'm focused about, I don't even know he is in the dugout next to me because I'm focused on the pitch thinking how we can win the game.

"I have had three games since I got the head-coach role and I'm sitting here unbeaten, we could have nine points but we have five and I would take that."

On an evening where tempers could have boiled over, the game itself was played in a good spirit and was only marred when Newcastle captain Fabricio Coloccini was hit with an object thrown from the Holmesdale Road stand as the visitors celebrated Cisse's opener.

Again, both managers were united in condemning the act - with Carver suggesting his skipper was lucky to not be seriously wounded by what appeared to be a coin.

"It just can't happen can it?" questioned Carver.

"It has got to be taken out of the game

What is disappointing from their point of view is that they have an unbelievable crowd here, an unbelievable atmosphere - it is a fanatical group of supporters in that corner.

"It takes one idiot to throw an coin, I have seen it and it misses Colo's eye by an inch - another inch and it could blind him."

Pardew said it would be an isolated incident but hopes the club put in the necessary steps to indentify the culprit.

"I saw the referee come over to the linesman and hand him something," he said.