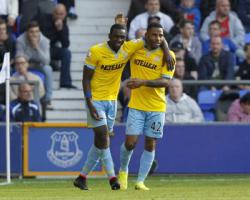 The Congo winger was instrumental in his side's surging second-half performance which he capped with the Eagles' final goal in the 69th minute to secure a 3-2 victory.

Romelu Lukaku had given Everton a ninth-minute lead, but Mile Jedinak equalised from the spot and Fraizer Campbell took advantage of an error by Tim Howard to change the course of the game

Bolasie's heroics sealed another fine day for Palace in the blue half of Merseyside after a 3-2 win in April eased relegation fears - despite a nervous finale after Leighton Baines' late penalty reduced the deficit.

Lukaku and Phil Jagielka both came close in a frantic finale but the final whistle brought a juddering halt to the hosts' recent revival and left them stuck on five points from as many Barclays Premier League games.

Martinez must have hoped the full debut of veteran striker Samuel Eto'o would grab the attention but the Cameroonian looked increasingly off the pace as individual errors helped the game slip out of his side's grasp.

It had all seemed so promising as the home side started with purpose, Eto'o having the first shot on target in the sixth minute then Christian Atsu shooting into the side netting before Lukaku opened the scoring in the ninth minute.

Osman's neat lay-off on the edge of the box sent the Belgian barging through and he finished with aplomb low to the right of helpless Palace keeper Julian Speroni.

Lukaku should have had a second four minutes later when he was served up a fine chance in front of goal by Eto'o following a Baines corner from the right, but the striker completely mis-kicked.

Palace barely surfaced in the first half hour but moments after Osman had shot straight at Speroni they seized their chance to draw level when Howard fouled James McArthur in the box and referee Michael Oliver pointed to the spot.

Jedinak stepped up to fire the ball confidently past Howard and give Neil Warnock's men a sudden foot-hold in a game that had occasionally threatened to pass them by.

Palace kept pushing at the start of the second half and they went ahead on 54 minutes when Howard flapped terribly at Martin Kelly's cross from the left allowing Campbell to get just enough power on the ball to flop it over the line.

Lukaku and Gareth Barry missed chances to draw level but it got worse for the hosts in the 69th minute when Jason Puncheon nicked the ball off Osman and played a perfect low ball to the unmarked Bolasie to stroke home.

Substitute Steven Naismith missed a chance to immediately reduce the deficit as he failed to get the vital touch to a Kevin Mirallas cross, then Scott Dann made a vital interception to deny Lukaku and an Osman effort was saved by Speroni.

Baines set up a frantic finale when he swept home a penalty eight minutes from time after Dann had brought down James McCarthy in the box.

Jagielka dribbled an effort inches wide and Lukaku scythed an 88th-minute effort across the face of goal as Palace waded through six minutes of injury time to secure the points.