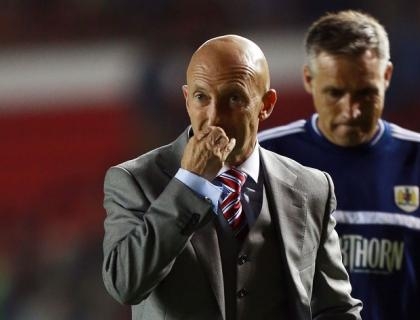 Second-half strikes from Jay Emmanuel-Thomas and Scott Wagstaff sealed a 2-1 victory for the home side, with Owen Garvan grabbing a consolation for Palace in stoppage time.

Defeat was a blow for Holloway, but perhaps not entirely surprising - he made 11 changes from Saturday's 2-1 defeat at Stoke.

Sunderland boss Paolo Di Canio avoided a similar upset as the Black Cats hit back from 2-0 down to beat Milton Keynes Dons 4-2 at the Stadium of Light.

Goals from Patrick Bamford and Izale McLeod put the visitors in control before Jozy Altidore finally got the home side on the scoresheet with 12 minutes left.

Ricardo Vaz Te's direct free-kick gave Sam Allardyce's men the lead three minutes before half-time and then Morrison struck moments into the second half after a precise cross from Stewart Downing.

Cheltenham fought their way back through a Matt Richards penalty in the 58th minute, but the Hammers held on for a 2-1 win.

Sweden international Johan Elmander marked his full Norwich bow with a brace in the Premier League side's 6-3 win over Bury.