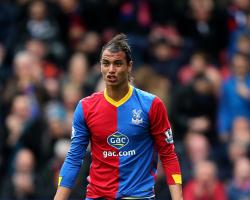 The 30-year-old Morocco international originally moved to Selhurst Park on a one-year deal last summer after leaving former club Arsenal and went on to become a regular fixture in the Eagles' side as Tony Pulis guided them to Premier League safety.

Chamakh scored six goals for Palace last season, including a run of three successive league games in December, and was transformed into playing in a position behind the main striker by Pulis.

One of 16 players signed by Ian Holloway ahead of Palace's first Premier League campaign in eight years, Chamakh opened his account in his second appearance as the Eagles lost 2-1 at Stoke.

That proved to be his one and only goal under the stewardship of Holloway, who was replaced by Pulis in November with Palace struggling in the relegation zone.

Chamakh's performances improved once Pulis had taken over in south London and the former Bordeaux striker became a favourite with the Selhurst Park crowd.

Four more league goals followed, three of which came in victories, as Palace flourished to finish 11th and Pulis took the Premier League manger of the year award.

With survival assured, Chamakh had hinted that his future lay with the club.

"My first choice would be to continue my adventure with Crystal Palace," he told the official programme.

"My priority is to stay here

The adventure here is not over

We've had a good season and built something really, really strong

I hope that will continue."

The ex-Arsenal misfit has got his wish and Palace supporters will be hoping to see another impressive season from both Chamakh and Pulis.