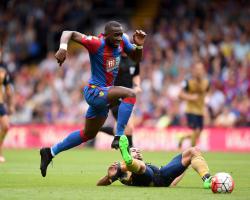 Crystal Palace V Aston Villa - view commentary, squad, and statistics of the game live.Eagles well stocked for Villa clashCrystal Palace have no new injury worries ahead of the visit of Aston Villa.Goalkeeper Julian Speroni (finger) and striker Marouane Chamakh (hamstring) are back in training but will not be risked just yet.Boss Alan Pardew is considering adding winger Bakary Sako to the squad for the first time since his summer switch from Wolves.Tim Sherwood's new-look squad were narrowly beaten by Manchester United last Friday having got off the mark with a victory at Bournemouth on the opening day, and Pardew is expecting a tough encounter."They've started well

Obviously Tim has bought in a whole new batch of players and it's difficult to get them to know exactly what you want," he said."I'm sure he's not there yet but in the two games they have played they have looked pretty cohesive and Tim will be pleased with that, and obviously they have talent."I think all teams at the start of the season are dangerous, because most of them have not had a bloody nose

They all have their ambitions for the season intact, no one has knocked it out of them yet."We think we will have a great season, Villa do, West Brom do, Watford do

It's a tough period to win games in the Premier League, that's why the top teams don't go flying away at the start because everybody carries that ambition."Aston Villa will come here expecting to win, there's no reason to doubt that

They won at Bournemouth, they'll win away again

So it will be a really good battle to grab the initiative."Jack Grealish could be in the Villa squad for the first time this season.The 19-year-old midfielder made a goalscoring return from a hamstring injury for the under-21 team on Monday

Carles Gil (ankle) and new signing Adama Traore also played in that game to build up their fitness and may be involved at Selhurst Park.Jores Okore remains out with a knee injury while Jose Angel Crespo is still working his way back from a groin problem."We need Jack and Carles," said Sherwood."It is unfortunate that two of the most creative players in the side have been injured at the same time

Now they are getting back to fitness, it will change us going forward."I think they could play together

If anyone watched them play for the under-21s, you can see they suit each other's game

They pass the ball to each other and they enjoy each other's company."They are very offensive players with a good technical ability so they can take us forward."Sherwood admits his young side will face a tough test at Selhurst Park against a vastly more experienced Palace team.He said: "They have got some very good players and Alan is a very good manager."They are a side full of men

They bring teams on to them and spring on you with the pace of Zaha, Bolasie, Puncheon."But we have to be ready for that and I want to show far more attacking threat than we did against Manchester United."