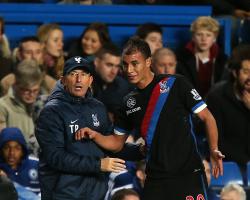 Pulis targets a team effort Tony Pulis is hoping his Crystal Palace team can be greater than the sum of its parts to pick up a result against Barclays Premier League leaders Chelsea on Saturday.The Eagles sit 17th in the table and are just three points clear of the relegation zone, with Jose Mourinho's Blues visiting Selhurst Park having thrashed Arsenal 6-0 last weekend.Former Stoke boss Pulis admitted Chelsea have better players than he has at his disposal but believes a strong team ethos can lead to them springing a surprise."If you're looking at the balance of the two clubs and what they have and haven't got it is a very uneven contest," he said."But football is a funny old game, if we set ourselves up well and give everything we possibly can...you never know."If you put our players up against their players individually I don't think there are many of our players who would get into their team."But collectively, as a group and as a team, if you are working together and putting things in place you can make it difficult for them."Chelsea hit six last Saturday and also put four past Tottenham earlier in the month, whereas Palace are finding goals difficult to come by as the season enters its most crucial stage.With just one goal in their last five games, coupled with the fact strikers Marouane Chamakh and Dwight Gayle are missing through injury, Pulis wants his side to be more ruthless in front of goal - while also being strong at the back."They have got some outstanding players," he said."There is no doubt that we will have to defend well but we also have to be a threat going forward and when we get our chances we are going to have to start taking them."We have talked about it this week with the players, when we get in there we need to start hitting the target, there are a lot of occasions when we get in there and snatch at things."You need a little bit of luck along the way but you need players who are going to relish the challenge and the players have got to do that."Pulis will once again be relying on Glenn Murray or Cameron Jerome to lead the line for the Eagles.Midfielder Barry Bannan will be pushing for a start having returned to the bench in last weekend's defeat at Newcastle following a spell on the sidelines through illness.Chelsea striker Samuel Eto'o is out of the trip with a hamstring injury.Willian is available after serving a one-match suspension, but Ramires is banned for two more games following his dismissal in the controversial loss at Aston Villa.Left-back Ashley Cole (knee) is still out and midfielder Marco van Ginkel (knee) is continuing his rehabilitation by playing for the under-21s.Chelsea are unbeaten in nine London derbies in the league this season, with six wins."This one is the last one so let's try to make it without defeat in the London derbies," manager Mourinho, whose Blues beat Palace 2-1 in December, said."For the fans 4-0 against Tottenham is more than three points, 6-0 against Arsenal is more than three points."We are in a good run, we are in a good moment

We are enjoying the situation."Palace was difficult at home and when Pulis was there for about two weeks, he was just arriving

Now after months of work and matches and matches, they are much more Tony Pulis' team and it's going to be very difficult."