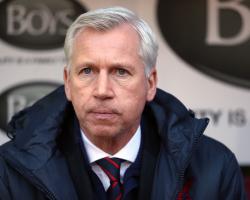 Crystal Palace V Everton - view commentary, squad, and statistics of the game live.Mutch ado about PalaceCrystal Palace midfielder Jordon Mutch is set to make his debut against Everton in the Barclays Premier League on Saturday after joining the Eagles from QPR.Mutch is fit and ready to play against the Toffees but fellow new signing Shola Ameobi will need longer to regain match fitness after leaving Turkish side Gaziantep in December.Manager Alan Pardew believes Mutch will bring the goals and guts to rescue the Eagles from relegation this season.Mutch only moved to QPR last summer but injuries hindered the midfielder and he only managed 11 appearances for Harry Redknapp's side."I was impressed by Mutch at Cardiff last season when I was Newcastle boss," Pardew said."It's true that he has had a number of injuries

You never know with a young player."He has fantastic technique

His left foot hit is as hard as his right

It's difficult to work out."One of our defensive statements is to not show the goal to a player, but it is very difficult not to show him the goal because he goes both sides and hits it just as well off both feet."He will score goals

His fitness and playing every week is the benchmark for him."Palace winger Jerome Thomas has picked up a minor knock and will be unavailable while Yannick Bolasie and Mile Jedinak are still away on international duty with Congo and Australia respectively.Everton are hoping to have midfielders James McCarthy (hamstring) and Darron Gibson (knee) and defender Sylvain Distin (groin) back in contention.Winger Kevin Mirallas is expected to be fit after being substituted with a hamstring injury soon after controversially missing a penalty in the goalless draw against West Brom last time out.Goalkeeper Tim Howard (leg) and midfielders Leon Osman (foot) and Steven Pienaar (knee) remain on the sidelines.Boss Roberto Martinez is convinced just one win could kickstart his side's season.Martinez believes Everton are stronger than they were a year ago but just need to rediscover the winning formula.Their current statistics do not compare favourably to last season, when they finished fifth

At the same stage last season they were sixth and just a point behind fourth place.But Martinez said: "I think confidence is an aspect you can turn around really quickly

I think a win gives you confidence

You need to make it really simple and once you get that win then the confidence and momentum triggers and it comes naturally to your way of playing."As a team we know what we can produce

We showed last season the level we can produce and if anything we are a stronger team than we were last season, in terms of experience and in terms of the players growing."That is a good level to look for, but it is important to get that belief and confidence that comes from winning feelings."We know we are missing points

All we want is to win games and then we must try to accumulate as many points as quickly as we can going into the final third of the season."