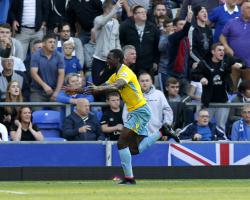 Crystal Palace V Leicester - view commentary, squad, and statistics of the game live.Warnock wary of in-form FoxesCrystal Palace boss Neil Warnock would prefer to assess Leicester based on their defeat of Stoke rather than their shocking win over Manchester United which rocked the Barclays Premier League.The Foxes have so far enjoyed their top-flight return, with one defeat in their opening five matches and a stunning 5-3 defeat of Louis van Gaal's United.Yet rather than get carried away with an "unusual" result, Warnock looks at Leicester's win at Stoke the previous week for indications of what to expect at Selhurst Park on Saturday."The Man United game is a very unusual game, so I don't think you can take too much out of that game, other than that they took their chances really well," Warnock said."I look at the way they beat Stoke

That's more realistic, I think."They beat Stoke quite well, they were very organised

They were very professional."Warnock, who has years of Championship experience, praised Leicester counterpart Nigel Pearson for reviving Leicester after narrowly missing out on promotion the season before last."Nigel's been building a team now for a couple of years," Warnock added."I've got a lot of respect for Nigel, I think he's done a fabulous job and it's not always been simple at Leicester."There have been moments where I'm sure people higher up thought about changing, but he stuck at it."It was a cruel way of missing out (on promotion)

I remember it clearly

From one end of the pitch to the other

That's as cruel as it gets."They regrouped and Nigel got to add to the squad and they never looked back."Warnock, who has Marouane Chamakh available following a hamstring problem, believes Leicester's squad and his Palace side share similar characteristics."He's got a very good group of players, similar to ours in character," Warnock said."They're all together, they've come up and won the league

And they're not frightened of anything

When you come up you just want to play."I always liked (Jamie) Vardy, before last weekend (against United), and (David) Nugent's an unsung hero."They spent well in the summer with the striker, (Leonardo) Ulloa, and at the back they've always had a steady side."Midfield creativity they've got, different types of players, (Esteban) Cambiasso

It's a good group, a good mix."Warnock changed all 11 players for the midweek Capital One Cup defeat to Newcastle, which came during extra-time, and is likely to revert to the side which won at Everton last weekend for the visit of the Foxes.Leicester boss Pearson has defended Jamie Vardy against suggestions of cheating following his performance in the shock victory over United.Vardy emerged as one of the central characters from the astonishing win at the King Power Stadium on Sunday three years to the day after he was playing non-league football with Fleetwood.With City trailing 3-1, Vardy first won a penalty despite appearing to foul Rafael in the build up, to which the young Brazilian retaliated by conceding the spot-kick.After the 27-year-old put the Foxes 4-3 up in the 79th minute, Vardy earned his side a second penalty four minutes later when brought down by Tyler Blackett, who also earned a red card for the challenge.Leicester earned a reputation last season as penalty specialists en route to claiming the SkyBet Championship, converting 12 overall - many won by Vardy - with eight of those coming in the first 13 matches.Asked about accusations of cheating regarding Vardy, Pearson said: "There is going to be more scrutiny in the Premier League, no doubt about that."My view is - and if you want to use that word, fine by me - but the officials are there to do their job and they will give penalties as they see fit."Jamie won a lot of penalties last year, but he did so because of his aggression and pace which commits defenders."Players have to be very careful in terms of contact in the penalty box."I think the reason this is being brought up is because of the challenge (from Vardy on Rafael) before the first penalty."That's up to the referee to see that

If he thinks it is an offence then he will give it, likewise with the one in the box."I think you need to look at whether we need to bring technology in to help the officials, would be my answer to that."If you're asking me whether both were penalties, yeah, I think they were."It doesn't matter whether the referee missed one outside the box before that."Pearson has no fresh injury concerns going into the game, with only defender Matthew Upson sidelined with an ankle problem.Pearson has confirmed defender Zoumana Bakayogo - not named in the club's 25-man squad to the Premier League at the start of the season - is to undergo surgery next week on an anterior cruciate ligament injury