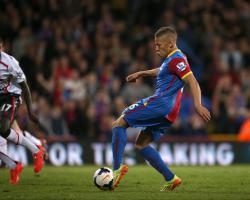 Crystal Palace V Liverpool - view commentary, squad, and statistics of the game live.Souare could make Palace debutCrystal Palace defender Pape Souare could make his debut in the FA Cup fifth round against Liverpool on Saturday after the Senegalese had a work permit application approved.Souare joined from Lille last month and has been cleared to play in the game at Selhurst Park but Eagles captain Mile Jedinak remains sidelined with an ankle injury.Yaya Sanogo (hamstring) and James McArthur (thigh) are also struggling to be fit in time while Shola Ameobi is still regaining fitness and unlikely to feature.Alan Pardew's side host an in-form Liverpool hoping for a repeat of their 3-1 win at Selhurst Park in November.The Eagles also dealt a heavy blow to the Reds' title hopes in May last season, when they came from 3-0 behind to draw 3-3."We take confidence from our recent record, without a doubt," said assistant boss Keith Millen."The last two times they've come to Selhurst, they've had two tough games."I'm sure they feel they're in for a real tough one again tomorrow and we need to make sure we don't disappoint them."Pardew is expected to overcome his illness in time for Saturday and the fixture will bring back fond memories for the Palace boss after he scored the Eagles' extra-time winner to beat Liverpool 4-3 in the 1990 FA Cup semi-final."The fans will remember that goal and getting to the final," Millen said."Those are the emotions you go through in the FA Cup and we want another day like that tomorrow."I was watching that game and I remember the occasion and getting to Wembley."We feel we're getting close to Wembley ourselves now so it's a big incentive."Liverpool captain Steven Gerrard will be missing from the squad after being ruled out for two to three weeks with a hamstring problem.With Lucas Leiva already out for at least a month with a thigh problem it means Jordan Henderson and Joe Allen are likely to be paired in central midfield.Henderson has taken on more responsibility since becoming vice-captain this season but may have to accept even more in the coming weeks.It is debatable whether Gerrard would have started against Palace anyway but, in his absence, Henderson finds himself having to up his game even more."To lose Lucas first was a big blow because he has been outstanding for us since he came into the team as that defensive, holding midfielder," said Henderson."Obviously Stevie (Gerrard) is a big loss, even though it is not as long (as Lucas), but there are some big games coming up that he might not be involved in."But it is another chance for people to come in and show what they are made of and slot straight into the team

Hopefully someone can do that."Maybe I need to take more responsibility with those two players gone."Forward Raheem Sterling, who missed the midweek league win over Tottenham with a foot injury, has to be assessed while youngster Jordon Ibe is cup-tied