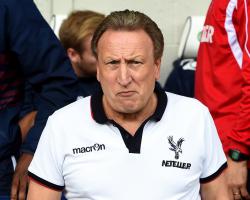 Crystal Palace V Sunderland - view commentary, squad, and statistics of the game live.Warnock focusing on Black CatsCrystal Palace manager Neil Warnock refused to be drawn further on the controversy surrounding referee Mark Clattenburg's disciplinary sanction from the Football Association as he focused on Monday night's clash against Sunderland.Clattenburg was dropped for this weekend's Barclays Premier League fixtures after breaking protocol following the match between West Brom and Palace so he could get back to Newcastle to watch Ed Sheeran perform at the Metro Radio Arena.The rules of the Professional Game Match Officials Limited (PGMOL) state officials must travel to and from the ground together to protect their integrity and security.It has also emerged that Clattenburg broke another rule by speaking to Eagles boss Warnock on the phone after the 2-2 draw at The Hawthorns

The PGMOL insists a referee should only be allowed to speak to a manager 30 minutes after the game and that conversation must take place in front of his assistants.Warnock was unhappy at a challenge by West Brom's Craig Dawson on Julian Speroni which led to the injured goalkeeper being substituted.Although the Palace boss himself is not expected to face any disciplinary action, Warnock wanted to draw a line under the incident as he focused attention on Monday night's visit of Sunderland."I don't really want to talk about it if I am honest, because it might get someone in trouble, and I think enough has been speculated on, but I did not do anything wrong," Warnock said when asked for his thoughts at Saturday's pre-match press conference."I don't want to talk about him or any referees to be honest, I talk about them enough

People get fed up of me talking about referees, so let me talk about my team and the game, Sunderland is one to look forward to really."Asked whether it was he who had called Clattenburg or the other way round, Warnock replied: "Never you mind

One or two people have said it was, one or two people have said it wasn't but whatever will be, will be."Sunderland have lost their last two matches, thumped 8-0 at Southampton in the last away match.Warnock, though, warned against complacency as the Eagles look for a first win in three matches."You don't kid yourself, results like Sunderland had don't happen very often," he said.Meanwhile, striker Steven Fletcher will not be fazed by Sunderland's presence in the Barclays Premier League relegation zone after spending much of his career to date scrapping for dear life.The 27-year-old Scotland international suffered the drop with both Burnley and Wolves despite scoring goals for both, and could only look on helplessly at the end of last season as injury prevented him from playing any part in the Black Cats' remarkable escape.However, he admits he and most of his team-mates - with the notable exception of former Manchester United duo John O'Shea and Wes Brown - have become accustomed to life in the lower reaches of the Premier League and are ready for the fight.Fletcher said with a smile: "The clubs I have been at, I'm used to it

The ups and downs, I am used to that kind of thing with being at Burnley and being at Wolves, so I kind of just take each day as it comes."But there are only a few players who can say they have been used to winning ways - I'd say that's Sheasy and Wes, maybe Adam Johnson at some stage at Man City - so the boys should be used to going into one game and getting a win and then the next game, they know it's going to be a tough task to go on a run."But if we can put a good run together, we should move out."Fletcher, who has shaken off the foot problem which prevented him from finishing the game against Arsenal, is convinced there is enough within the dressing room to avoid a repeat of the need for such heroics this time around.He said: "We know we have got the ability to stay in this league, the players we have got, You see it in training every day, some of the performances from the lads."But we just need to do it as a team and do it on a Saturday, or on a Monday

Obviously if we could be safe before we were last year, it would be a bit better, but we know we have got the team to get through a bad situation, like we showed last year."But we also feel we can put a good run together like we did in the (Capital One) cup, so if we can take that form we had in the league last year, and I think we will be more than okay."