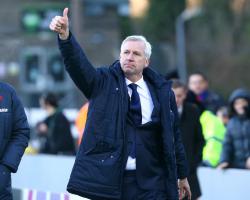 Crystal Palace V Tottenham Hotspur - view commentary, squad, and statistics of the game live.Pardew missing Palace pairCrystal Palace manager Alan Pardew will be without Yannick Bolasie and Mile Jedinak for his first Barclays Premier League game in charge against Tottenham on Saturday.Winger Bolasie has departed to play for DR Congo at the Africa Cup of Nations while midfielder Jedinak is away at the Asia Cup with Australia.Striker Marouane Chamakh has missed the last four league matches with a hamstring injury but could return, while midfielder James McArthur is also expected to be fit.Palace, who sit 18th in the table, find themselves in a similar situation to when Tony Pulis took over last season.Pulis inspired a remarkable turnaround at the club, leading the Eagles to an 11th-place finish, but Pardew insists safety is his only target."It's a tough challenge," Pardew said."We find ourselves in the bottom three with 18 games to go and home form hasn't been good

We need to try turn our home situation into a positive."In terms of the players, they need a lift

Hopefully my arrival, and maybe a signing or two, can do that and hopefully we can go on a run that gets us at least to safety."Realistically this year, although it was a terrific ending under Tony last year, one place above relegation will be enough for us to build again."Tottenham will still be without both Ryan Mason and Erik Lamela.Mason had only recently returned from an ankle injury before picking up a hamstring problem early on in the 5-3 victory over Chelsea and the 23-year-old remains sidelined.Club-record signing Lamela is also out due to a calf issue whilst Emmanuel Adebayor is still not considered fit enough to be in contention for a place in Mauricio Pochettino's squad."We analysed Palace, it was a few weeks ago - now they have a new manager who may have a new team and a new way of playing," Pochettino said."It is more difficult

He (Pardew) did a great job at Newcastle

I wish him all the best."I have very good relations with him

Always when you arrive at a new club it is good

It will be good to see him again

After that we try to get three points."We are in a good momentum but we need to keep that

We need to improve every day

The result against Chelsea was good because it helped us to believe more in our way."But that is in the past and we always need to look forward to the next game

Palace will be a tough game in a tough stadium."