Dann the man for Palace 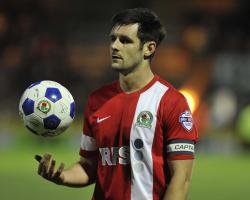 The 26-year-old has been at Ewood Park since 2011 and made 106 appearances, scoring seven goals.

Dann has now completed his move to Palace, signing a three-and-a-half year deal with the south Londoners.

The Eagles announced the centre-back's arrival on Twitter, while Blackburn released a statement shedding light on the terms of the deal.

"Rovers defender Scott Dann has this evening completed a deadline-day move to Crystal Palace," read the statement on www.rovers.co.uk.

"The 26-year-old joins the Barclays Premier League club for an undisclosed fee, signing a three-and-a-half-year deal."

Blackpool's Tom Ince and Celtic midfielder Joe Ledley are still on Palace's radar, while Nurnberg have signed Jose Campana on loan with a view to a permanent move.

The Eagles have yet to officially confirm that deal, but did announce the mutual termination of Wales defender Darcy Blake's contract.