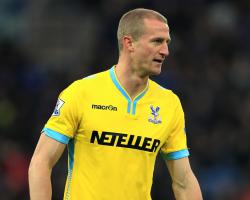 The 33-year-old Norwegian joined Palace 12 months ago after six seasons at Fulham, with his previous deal set to expire later this month.

Hangeland made a total of 17 appearances for Palace last campaign, 14 of which were in the Premier League.

The Scandinavian is thrilled to remain at Selhurst Park for another year.

Hangeland told his club's official website: "I'm delighted to have signed with Crystal Palace for the new season.

"I have really enjoyed working under Alan Pardew and we have a very talented squad who are all a really good bunch of lads to be around.

"These are very exciting times at the club and I look forward to playing a part in making next year in another successful one."