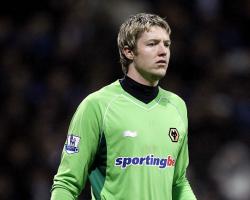 The 27-year-old becomes the first signing for new Eagles manager Tony Pulis, who is expected to further bolster his squad ahead of the deadline with reports of a deal for Blackpool midfielder Tom Ince being talked over.

Hennessey - who came through the ranks as a youngster at Manchester City before joining Wolves' academy in 2003 - will go straight into the squad for Sunday's trip to Barclays Premier League title-chasers Arsenal after agreeing a three-and-a-half-year deal at Selhurst Park to provide competition for current Palace number one Julian Speroni.

"I have met some of the lads and the staff already, so I am just looking forward to getting out onto the training pitch now," Hennessey said on Palace Player.

"We have got Arsenal on the weekend which is going to be a tough game but hopefully we can get something out of it.

He said it's a fantastic club and that I should get down here so I am over the moon it's happened.

"Going out to Yeovil (on loan) was good for me as I managed to get match experience again, but then that came to an end and I went back to Wolves and was sadly on the bench

Hopefully the tables will turn for me now."

Palace also confirmed on Friday afternoon that midfielder Jason Puncheon's loan move from Southampton had been made permanent, with the player agreeing a four-and-a-half-year deal.

The 27-year-old, who was at the Selhurst Park club as a youngster, said: "It is great to sign a permanent deal, it's something I dreamt about when I was a kid so I'm pleased to get it done.

"The massive factor in this was the chairman and the manager, the gaffer has shown great faith in me since he has been here and that's been unbelievable for me.

"It is a boost for me mentally - I thought it might happen at the end of the season, but it has come quicker and obviously that is good for both me and the football club."