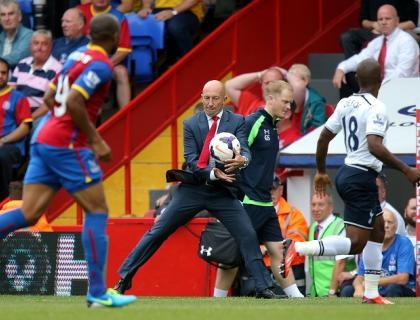 The Eagles' return to the Barclays Premier League was settled when debutant Roberto Soldado opened his account for Spurs with a second-half penalty that Holloway vigorously contests.

But his real anger was reserved for the officials' failure to spot what he views as a deliberate foul by Nacer Chadli on Stephen Dobbie shortly before referee Mark Clattenburg awarded the spot kick.

Holloway was significantly delayed in arriving for his post-match press conference after waiting 38 minutes to speak with Clattenburg about an incident that soured his afternoon.

"I've got to learn what a foul is because I thought Nacer Chadli deliberately body-checked Stephen Dobbie, smashed him down and ran off with the ball," Holloway told the BBC.

"It's going to be a long, hard season for me with these people (referees). I had this with Blackpool. Certain clubs get fouls and others don't. Tottenham will feel that if they play Man United.

"Do I think I would have got that at Tottenham? No I don't. I just want a bit of fairness. I want a foul like anyone else would have got one. I've got a horrible taste in my mouth after that."

Holloway also took issue with Clattenburg's decision to award a penalty after Dean Moxey handled Aaron Lennon's cross with an outstretched arm in the 50th minute.

"That was a completely and unbelievably dubious handball. Was it deliberate? I don't think he had a chance," he said in his press conference.