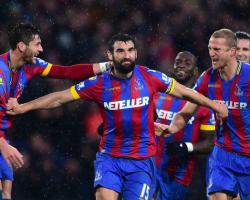 The Eagles recovered from an early Rickie Lambert strike to record a 3-1 victory - their first in the Barclays Premier League since September - and move out of the relegation zone.

Dwight Gayle, the scourge of Liverpool last season with a brace as Palace came from three goals down to snatch a point and all but end the Reds' title hopes, levelled on Sunday before second-half goals from Joe Ledley and Jedinak wrapped up a vital three points.

Warnock, 65, had seen his position come under scrutiny following a fallow run of results, but can now prepare for next weekend's game at Swansea knowing his side are just two points behind Brendan Rodgers' Liverpool in the table.

And Jedinak, who leads the way in terms of goals among the Palace squad this season, insists everyone is working to improve results as they look to build on an 11th-placed finish under Tony Pulis last term.

"You can judge it for yourselves from what you read but you look out there and you can't question anyone's commitment to the cause," he said when asked about reports concerning Warnock's future.

We know the nature of football and a result like this can lift anybody and I'm sure it will.

He told us not to take too many risks but get in their faces and put pressure on them, but do it in our shape and I think we got that spot on

It was a great team effort from the management and the players."

Palace's last victory before this one had come over Leicester, who picked up a point at home to Sunderland at the weekend to leave Warnock's men in the bottom three.

But Jedinak hailed a superb display against an out-of-sorts Liverpool side as the Eagles projected themselves up into 15th spot.

"It was massive," he said of the win.

"We have been under a little bit of pressure of late and haven't got the results we wanted even though we have been in the contests for large periods.

You couldn't ask for anything else effort-wise from the lads because we caused them some real problems."

Yannick Bolasie stole the show as he ran rings around Liverpool's back four at a wet Selhurst Park, and Jedinak was full of praise for the Congo winger - who fired his country into next year's African Nations Cup during the week.

"He shows that week in and week out - it is a great thing," he said of Bolasie's impressive display.

"It has been a great week for Yannick, qualifying for the African Cup of Nations and scoring a couple of goals and coming here and getting two assists - what more can I say? He has had a week to remember and long may it continue."

Bolasie will now be missing in January as he travels for the tournament in Equatorial Guinea, while Jedinak will also be absent as he strives for Asian Cup success on home soil with Australia.

"I think it is difficult to leave, to be honest," he added.

"You have got the responsibility as part of your national team and it is a tournament that obviously I'm going to be looking forward to, but until then it is business as usual in trying to get as many wins on the board before I have to go."