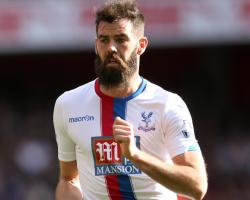 The Wales international midfielder suffered what was a suspected Achilles injury in the recent 2-1 Premier League defeat of Stoke but it has since been confirmed as a more serious problem.

Palace have confirmed Ledley will be "continually assessed over the next few weeks" in the hope of a swift recovery, but he will miss the Cup final against Manchester United at Wembley on May 21.

Ledley had long been an important figure for Wales and had been expected to start throughout next month's tournament, having been named in manager Chris Coleman's 29-strong squad for the training camp in Portugal later this month.

The optimistic outcome is that he will miss only the coming three to four weeks, possibly keeping him in contention for Wales' opening fixture against Slovakia in Bordeaux on June 11.

In his absence, Palace's Mile Jedinak, James McArthur and Jason Puncheon will vie for selection against United on the 21st.