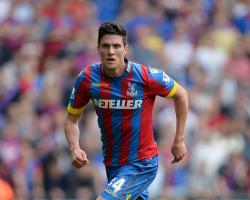 The come-from-behind 3-2 victory at Burnley maintained a 100 per cent record for the new boss and his influence has certainly been felt within the dressing room.

Former manager Neil Warnock was sacked in late December after just one win in 14.

The team drew two games while awaiting the arrival of Pardew from Newcastle, and he has overseen three successive wins - one over Dover in the FA Cup - since being appointed.

"Alan has brought great experience to the club and it is that little push that the club and us players needed around us," said Kelly.

"We needed that key figure and he has brought that and what he has done in the couple of weeks he has been with us has been brilliant.

"We are all enjoying our training, tactically we know what we are doing and we are showing that in games with the confidence we have got.

"The two draws were key to confidence before Alan came in and the three wins we have under him now is showing in our play we have the confidence and it is a great dressing to be in."

That was reflected in the performance at Turf Moor where the Eagles found themselves 2-0 down inside 16 minutes as Ben Mee headed in a corner after losing his marker and then Danny Ings scored his third in four matches after Joel Ward failed to shepherd the ball out of play.

Dwight Gayle, who was playing for Conference North side Bishop's Stortford three and a half years ago, drove in James McArthur's blocked shot to reduce the deficit before half-time and crucially swing the momentum Palace's way.

Soon after the break, Jason Puncheon ran 25 yards unchallenged to beat Tom Heaton from outside the area and, three minutes from time, Gayle converted an angled shot to complete the turnaround.

With on-loan Arsenal striker Yaya Sanogo making his debut, Palace appear to have plenty of options up front as they seek to maintain their move away from the relegation zone.

"If you look across the dressing room it is full of characters but we've got good players as well and it takes a good team with a good set of lads and good character to come back from 2-0 down," added Kelly.

"All the players dug in and when we went in at half-time we were the better side and it was all about the first goal after half-time and we got that early on.

"As long as we can keep the back four solid, which every team aims for, we have to rely on our strikers and we've got great wingers who put the ball into the box so it will be vital for us this season.

"If you looked at Yaya for his debut he held the ball up brilliantly and Dwight and 'Punch' scored either side so it is brilliant."

Losing a match in which they led 2-0 against fellow strugglers was a huge blow to Burnley but manager Sean Dyche insists it will not affect his players.

"You can't win them all but they are a big reminder of what we have to do at this level," he said.

"I think we've only had two below-par performances this season and I'm not going to start over-thinking it.

"You have to remember many people thought we'd need snookers by now so we are still in there."