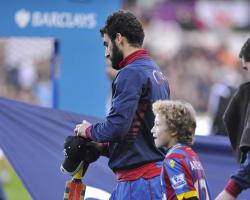 Socceroos skipper Jedinak paid his own personal tribute to compatriot Hughes before Palace's 1-1 draw at Swansea on Saturday when he carried out a cricket bat, which he placed along with a ball and a pair of caps on the touchline.

Hughes, 25, died on Thursday after being struck in the neck by a ball while batting for South Australia in a Sheffield Shield game in Sydney.

Jedinak made the poignant pre-match tribute and then scored from the penalty spot - his fifth goal in eight games - as Palace fought back to earn a prized Barclays Premier League point at the Liberty Stadium.

"Everyone in Australia is devastated by what happened, especially Mile being the captain of the Australia football team," said Jedinak's midfield colleague Ledley.

"That goal obviously meant a lot to Mile and we're all behind him.

"It's been a difficult time for him but to go out there and play like he has done is fantastic.

"He's determined as ever and it didn't affect his performance at all.

"He's done exactly the same in training because he's a strong guy and personality and he's been strong all week."

Palace endured a torrid opening spell when Swansea's superiority was complete and finally reflected on the scoreline after 15 minutes when Wilfried Bony netted his sixth goal in seven Premier League games with a sharp shot on the turn.

But Palace levelled 10 minutes later when Jonjo Shelvey's clumsy challenge on Marouane Chamakh allowed Jedinak to score from the spot and Neil Warnock's side grew into the game after that.

"We did the same against Liverpool, we didn't start that well but we ended up coming into the game," Ledley said.

"They had a good start but from there I thought it was 50-50 and on another day we could have gone on and nicked it on the counter-attack.

"It was a good point for us and that's what we needed after beating Liverpool.

"But everyone's determined and works their socks off here - the back four, midfield, wingers and strikers.

"Everyone in the team knows they've got to put a shift in or they'll be off, so every week we need to go out there and perform."

"This is football, it always has to go one way," Taylor said.

"This is a stat that people can talk about but this is the way it can go.

"You just carry on, it's not the fact of managing the game.

"We've just scored early and we should have made it two or three, but we didn't and that's it."

Swansea are at home again on Tuesday night when they entertain a Queens Park Rangers side who climbed off the bottom of the league on Saturday with a 3-2 victory over Leicester.

"If we play well and win then this result is forgotten about," Taylor said.

"It won't be an easy game but it's a home game and hopefully we can go one better than this one.

"Our play in the first half was unbelievable and if we'd finished a couple of those chances we would have been out of sight.

"We need to capitalise on our chances because at 1-0 games are never finished and you have to try and get another one."