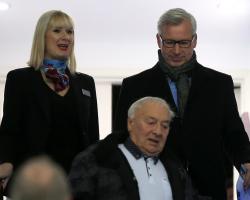 Former Palace midfielder Pardew watched the Eagles' 0-0 draw at Aston Villa ahead of his anticipated move from Newcastle.

The draw failed to lift Palace out of the Barclays Premier League relegation zone but Millen confirmed Pardew was pleased with the point after coming into the dressing room after the game.

And Millen, caretaker manager since Neil Warnock was sacked last month, is just waiting for Pardew's appointment to be rubber stamped.

He said when asked if all was on track: "I think so, I don't think he would have been at the game if there was a problem, he wouldn't have been sitting in the stands.

We have a big game against Dover on Sunday so we have to get our heads around that one.

Before the game when we left the hotel we weren't sure but then I got a message to say Alan was coming.

"He didn't have any input during the game or before but he came in after and was pleased and proud with what he saw.

"He said we need to add more to our game to score more goals and win football matches but it's a good start for Alan to see us."

Millen is also set to stay with Palace after Pardew asked him to continue at the club.

He said: "As the weeks go by he'll analyse what we do

We have to learn what he wants and hopefully we can do that.

"If Alan wants to bring in people I'm sure he will, we haven't got a big staff but we work hard and are organised."

A dull draw was only punctuated by Yannick Bolasie hitting the bar with just Brad Guzan to beat while Alan Hutton was denied by Julian Speroni and Christian Benteke fired Villa's best chance over.

Paul Lambert's side have failed to score in 11 of their 20 league games but are 12th in the table after the point.

They were jeered off by the home fans - after a second stalemate in a row following Sunday's 0-0 draw with Sunderland.

They have drawn blanks in their last three games and have failed to score in 39 out of 96 league games under Lambert and the manager insisted he understood the fans' reaction.

He said: "The fans have been great but I understand their frustration

I'm sure if we had scored nobody would have batted an eyelid.

"They want to see their team win

We just need the finishing touch and it will come."

Ron Vlaar limped out of the game early in the first half and will go for a scan on Friday with Lambert hoping his knee injury is not serious.

He added: "I'm not 100 per cent sure about Ron but we think it's his knee, the same as what he did at the World Cup

He thinks it may be that

To be fair I didn't want to bring on Ciaran (Clark), I wanted to give him a break."