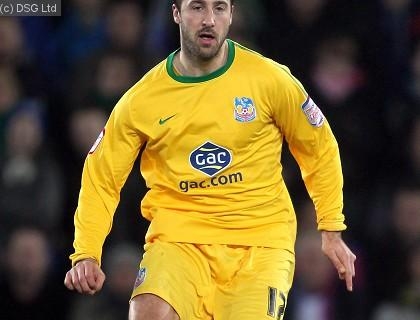 Dunk was dismissed after only seven minutes for a foul on Palace's Wilfried Zaha and although Owen Garvan hit the bar from the resulting free-kick, the Eagles quickly assumed control.

Murray headed home a Yannick Bolasie corner on 37 minutes and added his second from the penalty spot after 54 minutes. Garvan added the third for Palace - also from the spot - after Murray was fouled by Gordon Greer.

Under-fire Wolves boss Stale Solbakken earned some much-needed respite as his side ended a run of nine games without defeat by hammering struggling Bristol City 4-1 at Ashton Gate.

Sylvan Ebanks-Blake set Wolves on their way on 20 minutes, then two for Kevin Doyle and a fourth for Bjorn Sigurdarson made it safe before half-time. Neil Danns hit a late consolation for City.

Leeds continued their sudden improvement since the the conclusion of their takeover process as they won a feisty Yorkshire derby 4-2 at Huddersfield.

Chris Atkinson put the home side 1-0 up after 12 minutes before Michael Tonge and Luciano Becchio turned the game in Leeds' favour. An Adam Clayton penalty brought Huddersfield level before half-time, but a second-half strike from David Norris and a late Becchio header handed the points to Neil Warnock's men.

Troy Deeney scored twice as fast-improving Watford hammered free-falling Barnsley 4-1 at Vicarage Road, while Blackpool eased to a 4-1 win at rock-bottom and in-form Millwall were forced to settle for a goalless draw with Charlton in a tough south-east London derby at the New Den.

Fellow play-off hopefuls Hull won 2-1 at Nottingham Forest. Robert Koren's penalty opener was cancelled out by Billy Sharp, also from the spot, before Paul McShane headed a 69th-minute winner for the Tigers.

Mick McCarthy's Ipswich came from behind to claim a potentially crucial 2-1 win at Bolton. Mark Davies put the hosts in front after six minutes, but a DJ Campbell penalty levelled matters on 70 minutes before Michael Chopra hit the winner two minutes from time.