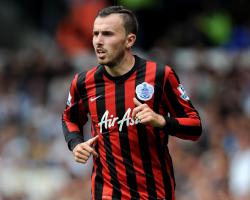 Just 25 weeks into a four-year deal at Loftus Road, the 23-year-old has moved on after failing to replicate the form which saw the Rs reportedly pay Cardiff ÃÂ£6million for his services.

Mutch has penned a four-and-a-half year contract at Selhurst Park, where the midfielder becomes the first permanent acquisition of the Alan Pardew era

A graduate of the Birmingham City academy, the midfielder spent time on loan at Hereford, Doncaster and Watford before joining Cardiff in 2012.

Mutch was particularly impressive last season in what was a failed attempt to avoid relegation by the Bluebirds, netting seven goals and providing five assists.

However, he struggled to make an imprint at QPR and, after just 11 appearances in all competitions, has now moved to south London.

Mutch arrives at Selhurst Park for an undisclosed fee and could make his Palace debut against Everton on Saturday.

He trained with his new team-mates on Thursday morning and becomes Pardew's second signing, following the loan move for Arsenal's Yaya Sanogo.