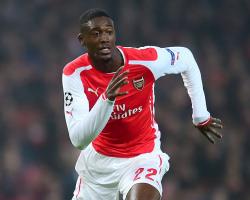 Pardew told the club's official website: "He's a young player with tremendous promise, somebody that I have tracked personally and this club has too so that fitted well."

The 21-year-old Sanogo, who joined the Gunners at the start of last season from Auxerre and featured in their FA Cup final win over Hull in May, said: "When the Arsenal manager spoke with me about Crystal Palace I was very happy because I want to play more games

"I think Palace are a good team, I watched the game against Tottenham and it was a great performance from the guys

I hope I can help the club have a successful second half of the season."

Pardew added: "We have given him an opportunity, he needs to play more games and I think he's ready for that and he proved that at Arsenal

It's tough to get in their team but he's closer to the starting action with us."