Palace feel good thanks to Pardew 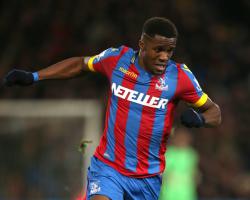 After a turbulent four-year spell at Newcastle, the former Eagles midfielder last week returned to his old stomping ground as Neil Warnock's successor.

Tottenham were the visitors in Pardew's first Premier League game at the helm - a match which he oversaw a timely end to an eight-match winless streak.

Palace rallied impressively after going behind early in the second half to Harry Kane's latest goal, with Dwight Gayle levelling from the spot before Jason Puncheon struck to secure a 2-1 win at Selhurst Park.

The winner came courtesy of a wonderful piece of wing play by Zaha, whose "electrifying" performance impressed Pardew as much as his response to starting from the bench.

"I think the gaffer has brought a high around the team again," the on-loan Manchester United winger said.

"I'd heard a couple of good things about him before he came in and he's brought something different which will help us move forwards.

"He told us he wants to add a threat going forward and gave us set positions and tasks to do, like catch them on the break, and that's what happened.

"Even though I wasn't starting I couldn't let my head go down, I just knew that if I came on I had to make an impression for the gaffer and I did that so I'm buzzing.

"He told me to go on and take on players so I never had any fear coming onto the pitch, I just knew I had to do one piece of magic and give us a chance and I'm glad I did that.

I was unlucky in that respect today but hopefully on another day I will."

Zaha certainly showed glimpses of the skill which led Sir Alex Ferguson to fork out ÃÂ£15million to coax him from Palace in January 2013.

Now back with his former club on loan, the 22-year-old is determined to help them stave off relegation and is eyeing another win when they travel to Burnley next weekend.

"We just have to play with no fear because we're around the bottom half of the table and we've got nothing to lose so we had to go at them," Zaha said.

"Beating a team like Tottenham makes it even better

There's always pressure in the Premier League but you have to deliver and we did that today.

"The Selhurst crowd is unbelievable and when they're buzzing you just want to play for longer and I'm glad we managed to give back to them today."

Before hosting Palace, Burnley face a third-round FA Cup replay at Tottenham on Wednesday evening, when Nacer Chadli is hoping for a morale-boosting return to winning ways.

"After the first goal we had to push for the second, unfortunately we didn't and Palace came back into the game with a penalty," Chadli told Spurs TV.

"I thought we were in control at 1-0 but after the penalty we were not in the game anymore and that's a big disappointment for everyone.

"Like we did before, after a loss we have to make things clear again and make a fresh start - and that's what we are going to do."