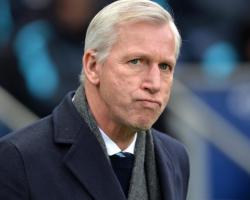 The Eagles were in the chase for a European place before Christmas but a nightmare run of 10 games without a win has seen them slip to 14th.

They are currently eight points above the drop zone but on Tuesday night travel to a Sunderland side looking to climb out of the bottom three, and drag Palace further into trouble.

At his pre-match press conference, Eagles boss Pardew said: "Are we in a relegation fight? Yes, of course we are.

"We keep losing. There is no talk of Europe at this club. We are focused now on what Crystal Palace need to deliver over the next 10 games.

"We've got a fantastic opportunity in the FA Cup but the league form hasn't been good enough and we need to put it right, straight away.

"That doesn't mean to say we can't have our strongest ever finish in the Premier League. We can do that, we have the capability but we need to kick into gear."

Despite Palace's poor form Pardew insists he has no concerns over facing the sack.

"I don't fear for my job at this football club," he added

"The pressure I am under is the normal pressure of a Premier League manager winning games.

"Crystal Palace fans know this team. Watching this team in the 14 months since I've been here, this is the first time we have had any down time.

"But we are not going to put our head in the sand. We are going to have to deliver a performance and that's what we'll try to do on Tuesday night."