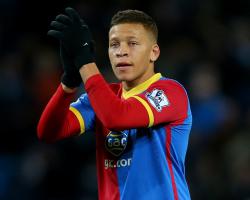 Glenn Murray - himself only just fully match fit following long lay-off - and Cameron Jerome, on loan from Stoke, are now set to come into contention against the Magpies.

"Chamakh won't be fit for Saturday

It is a massive blow because he plays that position so, so well," Pulis said at a press conference.

"He is a good player, can score goals and he can drop into that number 10 position.

Pulis revealed the club were still examining the extent of the injury to Gayle, who has scored four times since summer move from Peterborough.

"Gayley unfortunately got injured in training on Tuesday

It is his ankle," the Palace boss said.

"He is having a scan today, so we won't know what the extent of the injury is yet.

"We actually trained at Selhurst Park on Tuesday, because we thought it might be a bit too hard (at the training ground), but he did it at Selhurst."

Pulis, meanwhile, has moved to reject reports of a fall-out with co-chairman Steve Parish over plans for preparations ahead of the 2014/2015 campaign, which were said to include matches overseas.

The manager stressed with the south-east London club still uncertain of their top-flight status, nothing could yet be set in stone either way.

"The Championship starts two weeks earlier than the Premier League, so how can we put anything in place until we know what division we are in? It's a two-week difference

The story is ridiculous."