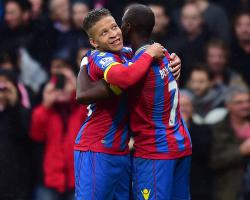 Only twice before have the Reds amassed fewer points at this stage of a Barclays Premier League season, but last year's runners-up are failing to hit the heady heights that saw them push Manchester City all the way and have now lost their last four matches in all competitions.

Neil Warnock will be delighted with a first win since September as Palace climb to 15th in the table following a deserved victory which saw them match their visitors for large periods, with Yannick Bolasie a constant thorn in the side of Liverpool's back four.

Rickie Lambert hit his first goal for Liverpool inside two minutes but that was as good as it got for the visitors as Dwight Gayle levelled before the break.

Both sides were equally slow out of the blocks in the second half but it was Palace who shone, with Joe Ledley and Mile Jedinak scoring three minutes apart to seal the contest.

That fixture came on the back of a home defeat to Chelsea and, just like the back-end of last campaign, Brendan Rodgers' side could not respond with a win in south London.

Mario Balotelli was ruled out with a groin injury having yet to make much of an impact since moving to Anfield.

He is still searching for his first Premier League goal but it was his replacement Lambert who achieved his own landmark early on.

The boyhood Liverpool fan was on hand to gather a pinpoint pass from his fellow former Southampton favourite Adam Lallana to net his first goal for the club since his summer move.

Being on the pitch at such an early stage is not something Lambert has been accustomed to, with this just his second league start of the season, but the England international has now staked his claim to stay in Rodgers' side.

The Reds have not won in the league since a late 3-2 victory at QPR over a month ago, but flew out of the blocks at a wet Selhurst Park as Lambert collected Lallana's pass and slotted home past Julian Speroni with aplomb to finally break his Liverpool duck with just 90 seconds on the clock.

Dwight Gayle came off the bench to grab two of those goals in the enthralling draw last season and it was the former Peterborough man who was on hand to equalise for the Eagles.

Bolasie picked the ball up and was allowed to canter into the Liverpool half unchallenged before his fierce drive came off the post and into the path of Gayle, whose shot was too strong for Simon Mignolet to keep out.

Lambert could not hit the target, with two headers either side of another arrowed shot from Bolasie that forced Mignolet into a smart save.

He was the man causing all of the problems for Liverpool, who were caught on the counter-attack by the blistering pace of the Congo international before he exchanged passes with Jason Puncheon and saw his shot blocked behind by Javier Manquillo.

The Spanish defender had no answer to Bolasie moments later but this time the Palace winger could only hammer his shot wide as the first half ended with the sides level.

There were no clear chances in the early stages of the second half with neither side really creating enough in the final third.

Steven Gerrard, who had little impact on much of the proceedings, could only hammer a free-kick into the stands before Manquillo side-footed a chance from inside the area out for a Palace throw-in.

Rodgers reacted to his side's lack of cutting edge by introducing Fabio Borini and Emre Can in place of Lallana and Joe Allen.

But it was the hosts who were celebrating the lead soon after and it was fitting that Bolasie was once again at the centre of the move.

The undoubted man of the match flicked the ball over Dejan Lovren's head and, having left the Croatian sprawled, crossed for Ledley to calmly finish and turn the game on its head.

The points were secured shortly afterwards as Martin Skrtel felled Gayle 30 yards from goal and Eagles skipper Jedinak, returning to the side following a one-match ban, curled in a beautiful free-kick.

Liverpool could not mount the kind of comeback that saw Palace snatch a point here in amazing circumstances six months ago and remain 18 points behind leaders Chelsea with just 12 games gone, with the Eagles two points further back.