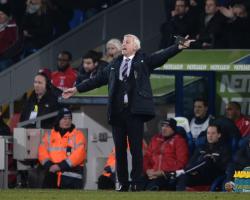 The Palace boss brought to an end an often-turbulent five-year spell at St James' Park to take over in south London at the turn of the year and their first meeting since then ended in stalemate.

Pardew's Eagles have made a habit out of falling behind but again showed their resilient nature as Fraizer Campbell came off the bench to earn a well-deserved share of the spoils for Palace.

It could have been an even sweeter reunion for Pardew had Brede Hangeland's late header not been tipped behind by Tim Krul, with Newcastle offering very little in the way of their own attempts to win the game.

Papiss Cisse's first goal of 2015 had put John Carver's side in front but the man who worked as Pardew's assistant did not see his team work Julian Speroni on any other occasion and the Magpies still only have one win since Pardew jumped ship.

The 53-year-old waxed lyrical about his Newcastle tenure in his programme notes and urged the travelling fans to remember the "good times" they enjoyed before the relationship soured.

But the away contingent only had unsavoury songs in store for their previous manager - whose misery was compounded when Cisse rose to head his former employers in front before half-time.

The visitors were largely on the back foot and, although Palace often lacked a killer final ball, the introduction of the returning Yannick Bolasie sparked them into life as he provided the cross for Campbell to turn home and level with less than 20 minutes remaining.

Pardew had won here 3-0 with Newcastle last season but his current side could not find enough quality to seal a comeback victory on this occasion, despite having most of the ball in the closing stages.

The game started without the sort of frenetic pace many would anticipate for such an occasion, with Palace quicker out of the blocks - although the recalled pairing of Yaya Sanogo and Marouane Chamakh failed to test Krul in the visitors' goal.

Arsenal loanee Sanogo did not last long before injury forced him off, with Campbell on in his place and instantly posing more of a threat.

The former Sunderland forward had the ball in the net after glancing Jason Puncheon's cross past Krul, but he was rightly adjudged offside.

Newcastle had soaked up most of Palace's pressure until that point and showed their own attacking prowess three minutes before the break as Daryl Janmaat broke down the right and dug out a perfect cross to find the unmarked Cisse - who made no mistake in heading past Julian Speroni to open the scoring.

The Newcastle fans marked the goal with further taunting of Pardew, while their captain Fabricio Coloccini appeared to be struck by an object thrown from the home support as he joined in celebrating with Cisse.

Pardew looked to his bench for inspiration as the second half followed much the same pattern as the first, with top goalscorer Dwight Gayle and the returning Bolasie both introduced just after the hour.

And it was Bolasie, home from African Nations Cup duty, who turned provider just minutes later as he swept in a cross for fellow substitute Campbell to sweep home.

The DR Congo winger was at it again moments later as he flashed in another ball that landed at the feet of Wilfried Zaha - who could only find the legs of a recovering Newcastle defender as he fired a shot off.

Hangeland saw a deflected header land on the roof of the net as Pardew's side went in search of a winner and the Norway defender came even closer as he drew a smart stop out of Krul.

That was the last good chance as Pardew ended the game by clapping all corners of Selhurst Park and enjoying cordial handshakes with former colleagues on the Newcastle bench and some of his ex-players as they departed down the tunnel.