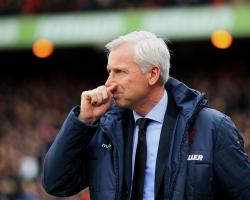 Crystal Palace have made their third signing inside the space of a week as Senegal international defender Pape Souare completed a move from Lille for an undisclosed fee.

Eagles boss Alan Pardew tasted defeat for the first time since taking over at the turn of the year, seeing his side lose 1-0 at home to Everton on Saturday, and has now moved to strengthen his defence.

Souare, 24, came through the ranks at Lille and has signed a three-and-a-half year deal at Selhurst Park, subject to a work permit being issued - and joins Jordon Mutch and Shola Ameobi in moving to Palace in the last seven days.

Striker Yaya Sanogo has also joined on loan from Arsenal as Palace have been one of the most active Premier League sides in the January transfer window, which closes on Monday night.

Having turned out for Senegal in the African Nations Cup, Souare flew straight into London as Alain Giresse's side slipped out of the competition at the group stage and has agreed on a move from Ligue 1 outfit Lille.

Despite having won their opening four fixtures under the former Newcastle boss, Pardew's side have fallen behind in all but one of his five games in charge and the hope will be that the introduction of left-back Souare can shore up the Eagles' defence.