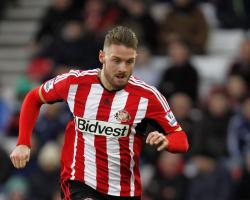 The striker moves to Selhurst Park for an undisclosed fee after four years at the Stadium of Light.

Wickham told the club's official site: "I think I needed the fresh start, I had four years up north and it's been a bit stop-start

Now I've come back home and I can settle down and see my family a bit more and hopefully let my football do the talking."

"I spoke to the gaffer last week and he said all the right things about the club and I've got friends here who also told me some very good things," he said.

"I looked at the team before I arrived here and the signings that have been brought in, and the potential to score goals and the chances that could be created was a massive influence

Hopefully I can add to that talent and make the squad stronger."

Wickham scored 15 goals in 91 games for Sunderland and helped them avoid the drop in 2013-14 when he netted five in their last six games.

But the England Under-21 international struggled to make a consistent impact at Sunderland after an ÃÂ£8million move and was loaned out to Leeds and Sheffield Wednesday during his time in the north-east.