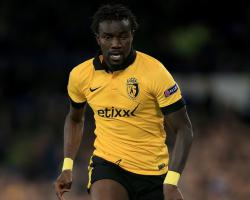 Eagles chairman Steve Parish announced the deal on his Twitter feed, saying: "Delighted that @papesouare has just this minute signed for #cpfc

A warm welcome from all of us".

The Senegal international flew straight to London to complete the deal after his nation's early exit from the African Nations Cup this week.

Souare becomes Alan Pardew's third signing of the week after the arrivals of Jordon Mutch and Shola Amoebi.

Mutch has signed a four-and-a-half-year contract and Ameobi has joined until the end of the campaign.