Palace too much for Norwich 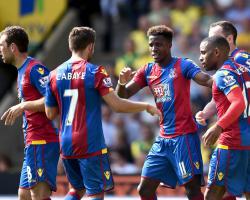 After a positive start by last season's Sky Bet Championship play-off winners, when striker Lewis Grabban missed a great early chance, Palace went ahead with a well-taken finish from Wilfried Zaha on 39 minutes.

The Eagles doubled their lead at the start of the second half through captain Damien Delaney.

Substitute Nathan Redmond gave the Canaries hope with a 25-yard strike on 69 minutes before Jerome thought he had hooked in an equaliser - only for the goal to be ruled out for dangerous play.

Norwich made a bright start and should have taken the lead on 10 minutes when a low cross from right-back Steven Whittaker was somehow stabbed against the outside of the far post by an unmarked Grabban from inside the six-yard box.

Palace, though, slowly grew into the match.

On 30 minutes, a deep cross was nodded back by Joel Ward.

The ball dropped to Glenn Murray in the six-yard box, who flicked it goalwards, but John Ruddy made a smart reaction save at point-blank range.

Palace were deservedly ahead on 38 minutes.

Jason Puncheon got away down the right flank, before chipping the ball across the penalty area, where Zaha turned it past Ruddy at the far post.

The visitors doubled their lead four minutes into the second half.

Pape Souare ran into the penalty area unmarked to head a corner towards the far post, where the ball was slotted in by Delaney.

Norwich almost pulled a quick goal back when Palace goalkeeper Alex McCarthy, signed in the summer from QPR, saved Grabban's effort and then kicked away a follow-up diving header from Bradley Johnson.

On 53 minutes, Norwich made a double change when Grabban was replaced by Jerome and Redmond came on for Tettey.

The England under-21 forward hauled Norwich back into the game with a goal out of nothing on 69 minutes, firing a low shot into the bottom left corner from distance.

Just four minutes later, Norwich thought they had equalised when Jerome hooked the ball over his shoulder, past marker Ward and into the roof of the net after a scramble in the six-yard box

Celebrations, though, were cut short when the referee gave a foul for the striker's high boot - which did not go down well on the Norwich bench or with the home supporters.

Palace were rattled, though, and Norwich sent on Gary Hooper for midfielder Graham Dorrans in search of salvaging a point.

Despite plenty of effort, the home side were unable to find another goal, with ÃÂ£10million summer signing Yohan Cabaye slotting home a third for Palace in stoppage time following more suspect defending.

"Cabaye is back in England....and says "hello again" with a goal Crystal Palace winning 3-1 at Norwich

Wifried Zaha: Fine finish by Zaha for the opening goal and simply had too much quality for Norwich throughout

If the 22-year-old can reproduce this sort of form over the season and show why Manchester United once paid ÃÂ£15million for him, then Zaha could find himself in contention for England again.

MOMENT OF THE MATCH

Lewis Grabban: How different the outcome might have been had Grabban converted an early chance when the ball fell to him unmarked in the six-yard box

He didn't, though, and Palace went on to further extend their lead before the former Bournemouth frontman was hauled off in the second half.

VIEW FROM THE BENCH

However, his decision not start with any dedicated winger backfired, as did his faith in Grabban ahead of Cameron Jerome

Palace manager Alan Pardew, though, got his tactics spot on, after watching the visitors take control once they had weathered the expected early Norwich pressure and then hold firm during the closing stages when under intense pressure before his ÃÂ£10million summer signing delivered a third goal in stoppage time.

MOAN OF THE MATCH

Referee Simon Hooper ruled out what would have been an equaliser for Norwich when Jerome hooked the ball over his shoulder into the net, giving a foul against the forward for dangerous play

Not one he nor his assistant on the far touchline will want to watch again.