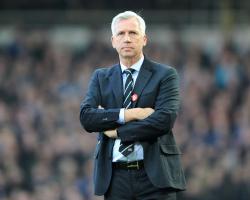 The announcement was eventually made on Saturday morning, two days after the 53-year-old, who spent more than four years on Tyneside, sat in the stands and watched Palace draw 0-0 at Aston Villa

A statement on Palace's official website read: "Crystal Palace Football Club is pleased to announce the appointment of Alan Pardew as the club's new manager after signing a three-and-a-half-year contract."