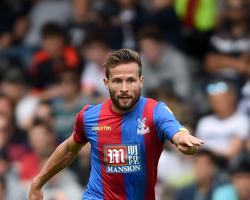 Cabaye moved to Selhurst Park in July but was regularly linked with Arsenal and went close to joining the north London side two years ago.

The Frenchman refused to play for Newcastle in August 2013 as Arsenal looked to be closing in on the midfielder but the Magpies rejected a bid and the transfer never materialised.

Palace host Arsenal on Sunday and Cabaye is likely to start after scoring on his Eagles debut in a 3-1 win at Norwich last weekend.

"Two years ago Yohan wouldn't play (for Newcastle) at Manchester City because he thought he was going to Arsenal so it's quite ironic he's now here with us at Crystal Palace," Pardew said.

"He's a fantastic player, we're honoured to have him and he's definitely the level of Arsenal players.

"I don't think Arsene Wenger or anyone at Arsenal would disagree with that.

"We have a player who could definitely play in their team and that's a nice feeling for us."

Cabaye eventually left Newcastle for Paris St Germain in January 2014 but he struggled to establish himself in the first team at the Parc des Princes.

"He was just not getting on the pitch," Pardew said.

"He was actually playing quite well when he did get on the pitch but the competition was immense.

"He didn't really have a tough time there, he was just frustrated he didn't get enough first-team games."

Pardew added: "I think the lads here have taken him under their wing - they understand he is the benchmark for our playing staff."