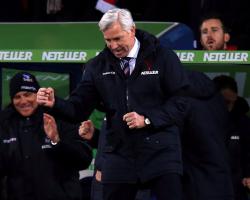 Pardew's first Barclays Premier League match in charge saw high-flying Tottenham arrive in south London and they struck first, breaking the deadlock early in the second half through Harry Kane.

This was not to be another miserable day for the Eagles, though

Dwight Gayle tucked away a penalty to draw parity and fine wing work from substitute Wilfried Zaha resulted in a cross which Jason Puncheon turned home, securing a 2-1 victory to end an eight-match wait for a top-flight win.

"It is a great leveller when you have momentum behind the team and, if I could pay credit it to Tony Pulis, the team in the last 15 or 20 minutes looked like the team from last year," Pardew said

"I just felt that we needed a bit more maverick behaviour in the team and that was the reason for the sub at half-time and that helped us.

I left him out because I wanted to see, if I am honest, what his reaction would be like.

"This is a boy whose confidence, I think, really needs to be rekindled

That will do him no harm today

That 20 minutes was electrifying - for us both, but more for him, really

"For me on the sideline, it is not difficult - shout out a few orders

The players have to play

"I thought they were terrific today and in the end, actually, it was our discipline that you really need in a Premier League team and our senior players that see us home.

"There was one unbelievable tackle from Damo [Damien Delaney] when he didn't have any right and the save from Julian Speroni from a Mousa Dembele shot which went everywhere.

"We had all the attributes of a great victory today and an eventful 90 minutes, really, that has worked out really well for us."

There was a wonderful atmosphere inside Selhurst Park, where Pardew's name was chanted from the outset and throughout.

It was a far cry from some of the grief he got at Newcastle, whose chairman Mike Ashley was one of the first to send through a congratulatory text message.

Things could have been different, though, had referee Anthony Taylor awarded Kane a late penalty after being taken down by Joe Ledley - the player adjudged, somewhat controversially, to have been brought down by Benjamin Stambouli for Gayle's equaliser.

"It was a strange game for the referee as well because I thought ours was a penalty but it was tight," Pardew said

"If you say ours was a penalty, you have to say Harry Kane's was as well so it was one of those games."

Tottenham counterpart Mauricio Pochettino was coy when asked about the referee's display, with his side's inability to break into the top four his main annoyance.

"I don't want to speak about the referee," he said

"I think it is a very difficult job, but it is true the penalty decision changed the atmosphere.

"Maybe after we suffered a little bit, Crystal Palace believed they can come to get the three points.

"A lot of long balls came in and I think that in this challenge they wanted it more than us.

"We are disappointed with the result and we lost a good opportunity to stay with the top four."