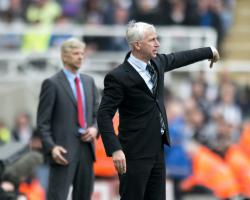 The Eagles boss has a chequered record against Arsene Wenger's side during his managerial career, with some of the highest and lowest points of his Newcastle reign coming with the Frenchman in the opposing dugout.

The occasional touchline bust-up between the two added to occasions such as a memorable 4-4 draw at St James' Park - with Pardew's Newcastle battling from four goals behind at half-time to salvage a scarcely believable point.

The 53-year-old has since departed Tyneside to take over at Selhurst Park and, having won three of his five Premier League games in charge, he knows what his players need to do this weekend to continue his fine start.

"You always relish challenging the big side and they are a massive club - great history," Pardew said of facing Arsenal.

"Of course, the style that they play gives you a certain problem and you have to make a call as to what you are going to do.

"They can expose you - first half, three years ago at Newcastle we absolutely got the run around but second half we turned it around dramatically.

"You have to accept the challenge of what they bring and if you're half-hearted in that challenge you are going to get found out.

"Of course, there are other games that I have absolutely suffered - losing 7-3 at the Emirates springs to mind

I have been embarrassed as well, I have had good days and bad days too, but none of that enters my focus this weekend

It is always a new game."

Arsenal face a Champions League tie against Monaco on Wednesday night and although the perceived advantage of facing a side fresh off the back of a European fixture may not be there for Palace, Pardew is taking heart from the fact the Gunners have won only two of their eight games directly preceding Champions League games so far this season.

"I'm pleased with that stat - it gives me some confidence," he said.

"Two out of eight is not good

Maybe with his selection of players or in his substitutions, it may influence the game."

Pardew took his Newcastle side to the Emirates earlier this season and saw banners unfurled by the travelling support calling for his sacking, with his team roundly beaten 4-1 by a rampant Arsenal.

Santi Cazorla scored twice in that game and the Spaniard has continued to impress this season, with Pardew highlighting the midfielder as Arsenal's player of the season so far.

"Sometimes you look at a team and the way they play and then you look at the statistics and it adds up," Pardew said.

"He has the most passes and the most crosses

He is at the top of the list in almost every section and therefore, for a player who has not always been a permanent fixture in that side, has earned that right and I'm sure Arsene is very pleased with him."