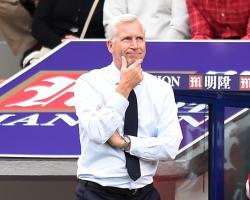 Such is Palace's strength in depth now that Pardew believes his job to be a difficult one.

Pardew will give those left out for Saturday's defeat of Aston Villa a chance to press their claims in a competition he considers important, but there may be one eye on Saturday's Premier League clash at Chelsea.

"It's very important to us, but we're going to make lots of changes, because I've got to keep the squad alive," Pardew said.

"There will be a lot of changes but we obviously want to win."

Midfielder James McArthur, who could be among those rotated out of the starting XI, agrees with his manager over the squad depth.

"This squad is so strong, you look at the boys that aren't even on the bench and it's incredible to think how (far) we've come

We're all pushing each other in the changing room," McArthur told his club's official website.

Yannick Bolasie is unlikely to return after being granted compassionate leave following the death of his father.

Bolasie, who has been linked with a ÃÂ£25million move to Tottenham, among others, will not be rushed following the bereavement.

Striker Dwight Gayle and club captain Mile Jedinak are expected to be among those to get a chance to impress from the start.

Hangeland is another who is likely to be given an opportunity by Pardew, who saw the benefits of his squad when he replaced Glenn Murray and Wilfried Zaha with Gayle and Jordon Mutch during half-time against Villa.

"It's a bit like Glenn and Wilf coming off at half-time (on Saturday)," Pardew added.

"They didn't really do anything wrong, but I had options and I need to play my options

I need to keep their spirits up.

"The margins between some of these players are so fine

Hangeland to (Damien) Delaney to (Scott) Dann is not a lot

These guys will play."