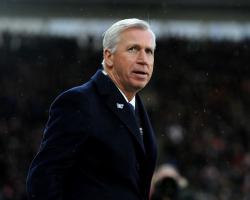 Last weekend, an estimated 10,000 Liverpool fans staged a walk-out of Anfield during their league match against Sunderland in protest at increases next season which included a new £77 match ticket and the club's first Â£1,000 season ticket.

While Liverpool's owners have since announced a U-turn on the proposed increases, the potential for protests at other clubs remains.

As an additional consequence, both Pardew and Bilic are concerned about a decline in the quality of the traditional matchday atmosphere should the average fan be priced out of attending games in the future.

Pardew said: "The owners of the football clubs - and we have a lot of foreign owners - need to really consider carefully that they don't lose the core supporters that we have.

"Because if they think it's just the product on the pitch that makes the Premier League what it is, it isn't - it's the atmosphere."

England does not stand alone on this front

Some Borussia Dortmund fans expressed their anger over ticket prices by throwing tennis balls onto the pitch during a cup game against Stuttgart on Tuesday.

However, the Football Supporters' Federation feels the U-turn from Liverpool owners Fenway Sports Group could prove a game-changer from fans' perspective.

"It is obviously a significant success for the Liverpool supporters' groups, Spion Kop 1906 and Spirit of Shankly, who organised the protest and managed to get a huge amount of support," FSF chairman Malcolm Clarke told Press Association Sport.

"In some ways it has been a bit of a game-changer but the next big milestone is to see what Premier League clubs do at their meeting next month.

"Last time they got a majority for some kind of package but it was not the two-thirds needed so we would hope in the light of the Liverpool situation they will deliver something meaningful."