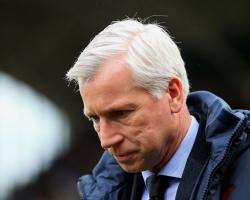 Both Palace and Newcastle boss John Carver condemned the actions, but another misdemeanour is reported to have occurred during Saturday evening's FA Cup fifth-round defeat to Liverpool.

The spotlight will be on the behaviour of home fans when Arsenal visit Selhurst Park on Saturday and Pardew does not want to see any further repeats after the club insisted they would ban anyone caught in the act.

"We take a zero-tolerance approach to this sort of behaviour and, if the perpetrators are identified, they will be banned indefinitely from the stadium

If they are season ticket holders their cards will be made void without a refund," a club statement read.

And Pardew echoed such comments when questioned during his press conference to preview the visit of the Gunners.

"It is a big concern for the football club because you don't want it," he said.

"But for me, the manager, I just want to prepare the team so it is not high on my agenda

I hope it stops because it's something we want to take out of the game.

"We've had two incidents and we need to stamp it down and that's what the officials at this football club will try and do.

"Absolutely (a ban is justified)

I think the first time a coin is thrown is maybe the heat of the moment but to do it twice is stupid and we can't accept that at any level.

Pardew hailed the impact social media played in highlighting the behaviour of a number of Chelsea fans on the Paris Metro on Tuesday night.

There were also audible chants of ''We're racist and that's the way we like it'' from the same group after the incident was filmed by a fellow Metro user - with the video soon spreading due to sites such as Twitter and Facebook.

And Pardew wants the same technology to be used to combat any further missile throwing, with the club's reputation at stake.

"The incident with Chelsea in Paris gives you the strength of social media," he said.

Let's have a picture of them and we'll try and do our best to find them.

"We represent society at all levels we get all types of our society here and we can't control their behaviour to a degree.

"All we can do is put on the best environment and most children-friendly environment we possibly can and we've got the best atmosphere in the country and we don't want to lose that with silly little incidents that have come, and I don't want to keep going on about it.

"Those few citizens that are letting us down, we need to reel them in and point them out to us."