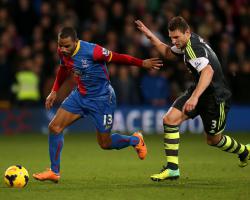 The 27-year-old's cool finish was in stark contrast to his much-maligned penalty howler in Palace's 2-0 defeat at Spurs last weekend.

Puncheon met the final whistle with palpable relief, wiping tears from his eyes and punching the air in delight, as Palace eased out of the relegation zone.

Puncheon was clearly happy to move past a week of controversy, after his Twitter spat with Neil Warnock, that included threats of legal action from the former Palace boss.

But Eagles manager Pulis played down Puncheon's unsettled week, saying he never had any doubts his loan recruit would come good.

"We had no problems with Punch, he missed a penalty albeit by a great distance, but that's what happens in life," said Pulis.

"You get ups and downs, especially being a professional footballer.

"The most important thing was for him to get back on and do what he does best and that is play football.

"He's a good player, he can do things, create chances and score goals, and that's more like falling off a bike for the first time.

"You make sure you get back on that bike quickly and start pedalling again."

Regimented Palace registered their sixth clean sheet in 11 games by throwing 10 men behind the ball where possible, and squeezing toothless Stoke between the lines.

Puncheon took his time for the crucial finish, that came after good work from Yannick Bolasie and Adrian Mariappa.

Palace's goal hero could have doubled his tally but for a fine late save from Stoke goalkeeper Jack Butland, who also denied Marouane Chamakh and Joel Ward in the same sequence.

Despite some late jitters though, Pulis felt Palace fully merited victory against his former club, ending the week he turned 56 with a belated birthday gift.

"It's a pleasing result for us, because we need to win home games, and to get a clean sheet was good," said Pulis.

"I was hoping and praying we'd get a second goal but Butland made some great saves.

"I felt more nervous in the last 10 minutes when they pushed (Ryan) Shawcross up front and just played balls into the box.

"You're hoping one of those doesn't drop to someone, luckily it didn't, and fortunately for us.

"We broke ever so well at times, created good opportunities from that and we should have scored more goals."

Frustrated Stoke manager Mark Hughes admitted his side deserved to come away with no reward from Selhurst Park.

Stoke are now without an away Premier League win in nine matches, with Hughes admitting concern at the Potters' away record.

"It was a low-quality game from both sides I would suggest, there wasn't a lot of guile and creativity shown," he said.

"We didn't have enough creativity in that final third to cause them enough problems of note.

"And that's where we are at the moment, we're okay at the back and into midfield, but then we get to a point where we find it difficult to create those clear-cut chances.

"So it's disappointing that we were unable to really build a performance that would enable us to take the game away from Palace.

"We've been talking about our away form and we really felt this was a game we could win, but we gave away that goal and after that it was always going to be difficult."

Pledging to sharpen up his side's defending, Hughes conceded Stoke had allowed Puncheon far too easy a path to the winning finish.

"We're better than that, and we can't allow consecutive errors to happen in Premier League games, because inevitably they lead to goals," he said.

"That allowed the lad to shoot in the six-yard box, and they scored the winning goal.

"Those frailties in our defence need to be worked on and that's something we'll address."